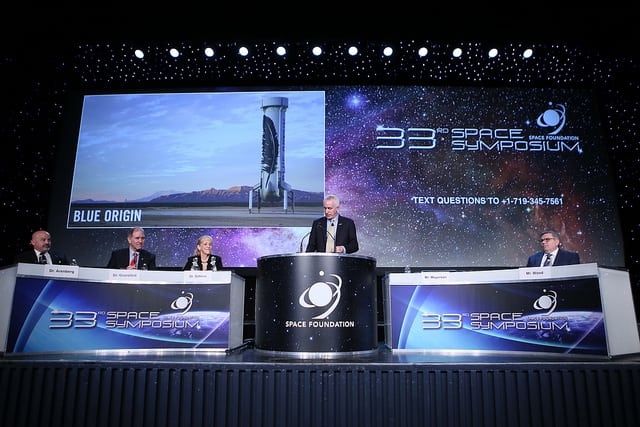 Although the capabilities of our space assets continue to improve, the industry is constrained by what we are able to lift up into orbit. During the deep space exploration panel at the 33rd Space Symposium, the speakers concluded that the space industry needs larger, more powerful boosters to continue to progress. Panelists agreed that technologically we have evolved enough to do new things from Earth orbit, such as search for potentially habitable exoplanets, for example. Now, the biggest hurdle is bettering our launch capabilities to improve access to space.

While the James Webb Telescope, scheduled to launch in October 2018, is the largest telescope ever built to date, astrophysicist and former NASA astronaut John Mace Grunsfeld said it still is somewhat limited in its ability to detect the elementary building blocks of life such as methane, water and carbon dioxide. “It’s an incredible machine but it’s not big enough to find out if we’re alone in the universe. An Earth 2.0 will be dimmer than the faintest galaxy in the Hubble deep field,” he said.

“Heavy lift would allow us to build a big enough telescope … Imagine what we can do putting the pieces of a telescope in a fairing and having astronauts or robots build them in space. We need to be bold. We were audacious with the James Webb telescope, but we know how to big builder,” Grunsfeld said.

Northrop Grumman’s Jonathan Arenberg, chief engineer for the James Webb telescope, described the industry’s launch limitations as “the tyranny of the fairing.” Currently, he said, we are limited to 5-meter fairings, which cannot carry large enough payloads to accomplish certain milestones. “You find that most of the scientific promised land is beyond [this] frontier … which brings me to my conclusion that scientific advancement requires these larger boosters. It’s foundational to the continued progress of space and astronomy,” Arenberg said.

Of course, improving our launch capabilities will unlock more than just deep space observation — the panelists agreed that heavy lift is what will allow us to research and colonize other bodies within our own solar system, too. One of the primary objectives across the industry is founding a settlement on Mars to enable extended stays for planetary scientists and astrobiologists. Our ability to carry heavier, more complex satellites up into space becomes relevant here because as Grunsfeld pointed out, we may have to assemble scientific instruments in Mars orbit before bringing them down to the surface.

Michael Wood, chief engineer of Space Launch System (SLS) at Boeing, expects heavy lift to eliminate the issue of mass and propellant weight, which should improve the maneuverability of space assets and unlock activities such as in-orbit servicing. “It facilitates much greater propellant margins and allows a planetary orbiter to make orbit changes [and] reorientations. Basically, you can capture an orbit and loiter there for years,” he said.

Blue Origin President Robert Meyerson took the opportunity to reiterate the company’s long-term vision, which is to have millions of people living and working in space. He stated that the company’s newest rocket, New Glenn, along with future vehicles under development, will help usher in this next era of human space travel not only due to their operational reusability, but also their size. “New Glenn is rather large by comparison to other current rockets but it is the smallest orbital vehicle we will ever build,” he said. According to Blue Origin, the two-stage variant of New Glenn will be able to lift 13 metric tons to Geosynchronous Transfer Orbit (GTO) and 40 metric tons to Low Earth Orbit (LEO), and is designed to fly more than 100 times. “Reusability is the holy grail of rocketry,” Meyerson said. “We want to drive to a future where reuse is the norm.” Over the next couple of decades, Blue Origin hopes to leverage its heavy lift capabilities to establish lunar architecture for human settlements. Its Blue Moon mission currently under development is geared toward transporting cargo to the Moon to support such missions in the future.

Ultimately, the panelists concluded that improving our launch capabilities and creating lasting settlements off-planet is the only way to ensure mankind’s long-term survival. “Any species that stays in a very small area is essentially a sitting duck with regards to natural catastrophe, plague, famine … If you look at the history of species on this rock, they tend to migrate. Some of those critters survive and some of them don’t, but what that does is support the survival of a species,” said Mary Lynne Dittmar, panel moderator and executive director for the Coalition for Deep Space Exploration.