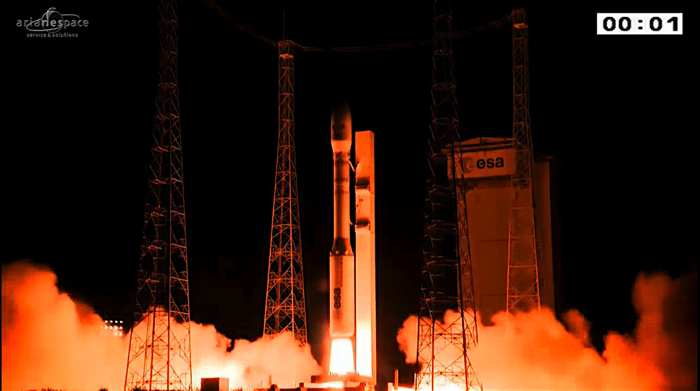 [Via Satellite 09-19-2016] Arianespace completed its first fully commercial mission with the Vega light lift launch vehicle Sept. 15, orbiting four SkySat satellites for Terra Bella, a Google company, and PeruSAT 1 for the Peruvian space agency CONIDA. The mission marks the seventh launch of Vega, which is the newest member of the Arianespace launch family, having debuted at the Guiana Space Center in 2012.

Space Systems Loral (SSL) built the SkySat 4, 5, 6 and 7 satellites using the Terra-Bella-designed dedicated SkySat platform. Each satellite weighed 110 kg at liftoff and are now in a Sun-Synchronous Orbit (SSO) at an altitude of 500 km, where they will enable sub-meter 3D mapping of the entire planet.

CONIDA’s PeruSAT 1 was ordered within the scope of an agreement between the Peruvian and French governments. Airbus Defence and Space, manufacturer of the satellite, coordinated the launch under a turnkey contract for the space agency.

The optical observation satellite can conduct 0.7-meter resolution imaging, and will operate from SSO at an altitude of 695 km.

Arianespace has nine future Vega launches in its order book, the majority of which are for Earth observation. One-third of the backlog is for institutional customers and two-thirds for export customers. A European Space Agency (ESA) program jointly funded by Italy, France, Spain, Belgium, the Netherlands, Switzerland, and Sweden, Vega moved to full commercial exploitation in December 2015, and will continue in its next generation form in 2019 as Vega C, providing increased performance over the current version in terms of payload capacity (weight and volume), according to Arianespace. The company intends to start marketing Vega C launches by the end of this year.