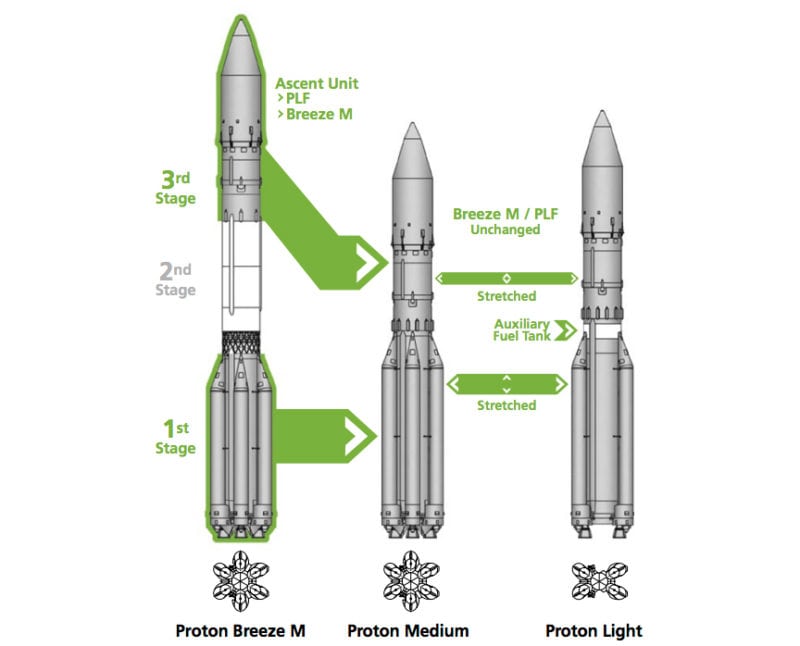 [Via Satellite 09-16-2016] International Launch Services (ILS) has announced a product line extension of the Proton Breeze M commercial launch vehicle designed to expand the addressable GEO market for cost-effective launch solutions in the small and medium satellite class range (3 to 5 metric tons). Designated as “Proton Variants,” these two additional vehicles will be optimized two-stage versions of the Proton Breeze M launch system for exclusive commercial use by ILS.

The Proton Variants initial launch capability will be established beginning in 2018 with the “Proton Medium” vehicle launching from Pad 24 at the Baikonur Cosmodrome. The two-stage Proton Medium Variant will have a 4-meter payload fairing and use the standard Proton M configuration with six engines on the first stage. It will be followed in 2019 by the “Proton Light” Variant. The two-stage Proton Light will have a 4-meter payload fairing but feature only 4 engines on the first stage. Both variants will maintain use of the Breeze M upper stage for spacecraft insertion.

“The design aspects of the variants were directly derived from the requirements of our customers to include reducing the basic cost of the vehicle, improving the design reliability and addressing the 3 to 5 metric ton satellite performance range. With this in mind, the development of this expanded Proton product line was simplified by restricting the vehicle modifications to minimize changes to existing Proton propulsion and Guidance, Navigation and Control (GNC) systems while making full use of the heritage flight-proven elements of the Proton Breeze M system. This is achieved through the elimination of the existing second stage, minor lengthening of the remaining two booster stages and no modifications to the Breeze M upper stage. The removal of the existing second stage with four engines for the Proton Medium and the additional elimination of two first stage engines and associated tanks for the Proton Light provides a simplified and elegant design solution to reduce cost and increase the design reliability of the expanded Proton product line,” said ILS Vice President of Engineering and Mission Assurance, Jim Kramer, who is responsible for the commercial development of the Proton Variant product line.