SpaceX’s Shotwell: Falcon 1 Will not Return 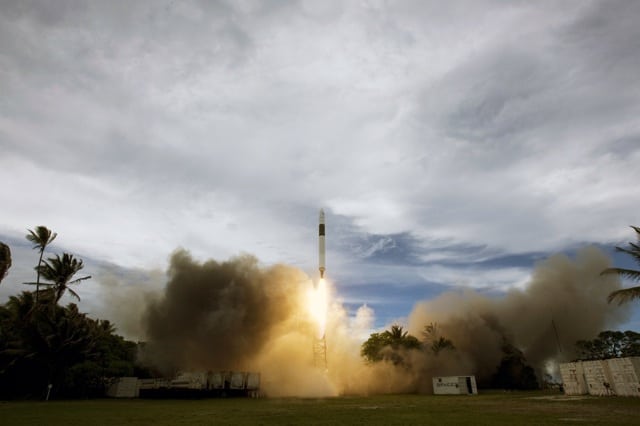 Falcon 1 takes off on its first successful flight delivering the RazakSAT satellite to orbit in 2009. Photo: SpaceX

[Via Satellite 08-10-2016] SpaceX President and COO Gwynne Shotwell confirmed that SpaceX has no intentions of bringing back the Falcon 1 small satellite launch vehicle. Speaking Aug. 9, at the Small Satellite Conference in Utah, Shotwell said while the market shows greater promise for dedicated small satellite launchers today, SpaceX will not be reviving its first vehicle, which was dedicated to this market.

“We are not going to bring Falcon 1 back,” she said, explaining that instead the company is choosing to serve the SmallSat market through rideshares, with complete rideshares being one of the best ways. Spaceflight Inc. recently purchased a full Falcon 9 entirely dedicated to SmallSat launch. Shotwell pointed to this approach as one of the ways SpaceX will continue to serve the SmallSat market without the Falcon 1.

The Falcon 1 was a two-stage rocket that used a Merlin engine for the first stage and a Kestrel engine for the second stage. The inaugural rocket had three failures that nearly undid the then fledgling company before successfully launching on Sept. 28, 2008 from the Marshall Islands. The mission delivered a 165kg payload simulator to Low Earth Orbit (LEO). After one more mission, in which the Falcon 1 successfully launched RazakSAT for Malaysia, SpaceX retired the rocket and progressed from there with the Falcon 9.

“The market was just not there, and when target market crashed in 2010 it really made that vehicle almost impossible to keep going and make money,” Shotwell explained. She said the demand for SmallSat launch has since changed dramatically, but that SpaceX would leave providing dedicated light launch vehicles to other companies.

“We couldn’t get it to earn its place on the factory floor,” she said. “Falcon 9 and Dragon were much better products for us to pursue without completely giving up on the SmallSat market. I’m hoping that the case has changed enough. Certainly the numbers — both the investment numbers as well as the number of launches — have changed dramatically and that is something that the Falcon 1 did not have.”

Surveying the market today for SmallSat launches, Shotwell estimated that more than 10,000 such spacecraft could launch over the next decade. SpaceX has flown a number of SmallSats, typically as secondary payloads on Dragon missions to the International Space Station (ISS) for NASA. Shotwell said reusability is the company’s number one goal now, and that achieving this goal would open up more launch opportunities for SmallSats. She said SpaceX is testing the first stage booster that returned following the JCSAT 14 mission for Sky Perfect JSAT of Japan intensely back in Texas. The booster for this mission was “the most beat up during reentry” compared to the three other recovered boosters. These tests are leading up to SpaceX’s first attempt at reusing a rocket booster with a paying customer.

“We are going to run as many tests on this stage as we can pull off in between production missions that we have to go test on that stand, and hopefully we will get to more than four but probably eight to 10 of these before we go ahead and refly,” she said.

Shotwell also mentioned recovering the second stage of the rocket as well, estimating that this may take another five years or so to figure out. She said SpaceX “spent a fortune” on the Falcon 9 to upgrade it to a version that could land after delivering a payload to orbit. The result is the upgraded Falcon 9, which Shotwell said features improved engines, larger propellant tanks and the use of highly densified, super-chilled Liquid Oxygen (Lox) fuel, which gave about a 30 percent propellant residual for the first stage’s return flight. Feeling greater confidence in the system, Shotwell said SpaceX may fly not one, but two of the previously flown first stage boosters this year.

[Tweet “SpaceX may fly not one, but two of the previously flown first stage boosters this year.”]

SpaceX also has the maiden flight of the Falcon Heavy coming up. Shotwell said this rocket, which features three Falcon 9 boosters strapped together, will launch more than 30 satellites during its maiden mission. She admitted that the idea of the Falcon Heavy, though simple in concept, has proven complicated. The first mission, originally planned for 2016, is delayed to the third quarter of 2017. The rocket, while providing launch capability for heavier payloads than the Falcon 9 can support, will also provide additional launch opportunity for SmallSats, she said.

“There should be a lot of extra capacity on this rocket. Hopefully we will fly a lot of [EELV Secondary Payload Adapter] ESPA, or ESPA-like rings underneath the primary payload to provide regular access,” she said.

And as SpaceX fulfills its goal of interplanetary travel, Shotwell said these missions too will provide future opportunities for SmallSats to travel far.

“Mars and the Moon I think are now going to be quite accessible to the [SmallSat] community,” she added. The first Red Dragon Mars-mission is slated for 2018.

SpaceX itself is working on its own fleet of small satellites for telecommunications services around Earth, which the company has given limited details on. Shotwell said the company is continuing to work on its SmallSat constellation, expected to be around 4,000 satellites, for global broadband services, including potential use of laser communications.

“We actually are working on some satellite componentry, but mostly on the payload to facilitate a global internet system … assuming we can get the technology right,” she said.