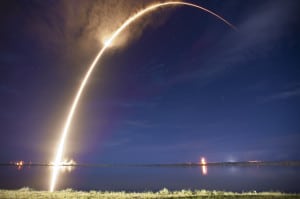 [Via Satellite 09-08-2014] After two delays, AsiaSat’s newest communications satellite, Asiasat 6, successfully lifted off on Sept. 7. This was the second SpaceX Falcon 9 launch for AsiaSat this summer, after AsiaSat 8 on Aug. 5.

Approximately 32 minutes after liftoff, the AsiaSat 6 spacecraft successfully separated from the launch vehicle. AsiaSat acquired the first signals from the satellite in Hong Kong 55 minutes after launch. Over the next few days, AsiaSat 6 will move to its operational position, approximately 36,000 km above the equator where it will undergo in-orbit testing before being brought into commercial use.

AsiaSat 6, based on Space Systems/Loral (SSL) 1300 platform, is designed to provide region-wide connectivity at its nominal orbital location of 120 degrees east. With 28 high-powered C-band transponders and a design life of 15 years, AsiaSat 6 offers two beams: one global beam and one regional beam for video distribution and broadband network services in the Asia-Pacific region.

Thaicom has leased 14 of the 28 transponders, which the company will market as its Thaicom 7 satellite. The launch allows the operator to expand its broadcasting service platform and provide media and data services for the entertainment industry and telecom operators across Asia and Australasia. Transponder capacity on THAICOM-7 has been fully booked at the time of launch, made up of approximately 50 percent pre-launch sales, with the remainder in the final contract stages.