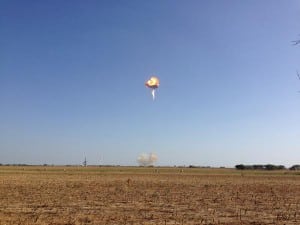 [Via Satellite 08-25-2014] On Aug. 22, SpaceX conducted a test of a reusable rocket in McGregor, Texas. The rocket, a three-engine version of the Falcon 9R, experienced an anomaly resulting in automatic termination by its flight termination system.

SpaceX said in a statement that detecting vehicle anomalies during testing is the purpose of its Research and Development (R&D) program. The company added that this test was the most complicated challenge given to the Falcon 9R. Information gained from flight record details will influence the next test.

According to SpaceX, a representative from the Federal Aviation Administration (FAA) was present throughout the test. No injuries or near injuries were reported, as the vehicle remained in the designated flight area at all times.