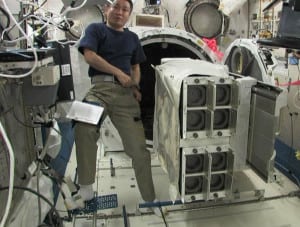 [Via Satellite 02-26-2014] The use of the International Space Station (ISS) as a platform for launching CubeSats has grown so much that the station crew may have to adjust their approach to keep pace. The most recent load of 33 satellites from Planet Labs, NanoSatisfi, SkyCube and others currently under way is now more than half way through deployment, and future launches to the ISS are already filling up. The demand for these launches has exceeded the expectation of NASA, JAXA and the commercial companies involved.

“This is our first deployment of CubeSats from the station using our own hardware,” said Jeffrey Manber, CEO of NanoRacks. “We launched one CubeSat in 2013, and we projected to our investors that we should do three to five satellites this year,” he said, laughing slightly at how far off they were. “We expect if all goes well to do 100 this year.”

To date, NanoRacks has launched 150 payloads. The company used eight deployers to launch 16 CubeSats from the current load, 28 of which come from Planet Labs. The second round of deployments is currently underway. These spacecraft were delivered as secondary payloads onboard Orbital Sciences’ commercial resupply services (CRS) Orb 1 mission. Astronauts on the ISS have been busy deploying the satellites, and NanoRacks has two to three more payloads planed for this year alone.

“You come up against the limits of the station,” said Manber. “That’s something we are talking to NASA about right now.”

The demand for these launches comes from a variety of sources in percentages that are not expected. While schools are known for having CubeSat programs, they do not make up the majority of CubeSat users.

“Until this service from NanoRacks came along, everyone assumed it was academic,” said Manber. “The shock of Planet Labs was that they are commercial. That is getting all sorts of publicity. We are seeing very strong interest from commercial companies … second is U.S. government research satellites, and third is academia. And that is exactly opposite of what most people thought two years ago.”

“The demand for CubeSat launches is steadily increasing, not just from universities and government programs, but from commercial entities as well,” he said. “This growth extends outside of the U.S. and Europe to countries that are developing space programs.”

Small satellites are a compelling route to space for countries that have new space programs. As more nations get involved — often with smaller budgets — CubeSats are becoming a cost-effective option to reach national priorities in space. According to Manber, the company is close to signing its first South American customer. Other customers include Romania, Vietnam, Saudi Arabia, Israel and Denmark.

“Two markets are coming of age here,” said Manber. “Small satellites are truly coming of age, and so too the use of an orbital platform for service.”

To continue to grow, NanoRacks is working with NASA and JAXA to evaluate new options. By demonstrating that the company’s hardware works, they are opening up doors for greater space station utilization.

“They really are cognizant that this is a commercial business, and we’ve started talking with the space station program people about ‘how do we grow? Can we get to 200 satellites? Can we get to 300? Can we get propulsion, and can we get to higher orbits?’” said Manber. “These are questions we are all asking now.”

Anticipating that small satellites mark the beginning of an important industry, Manber expects other options for deployment to develop. Spaceflight Inc. is working with NanoRacks to provide more desired launch opportunities.

“For the commercial sector we see 400 kilometers and 52 degrees as a great location for customers seeking technology demonstration, but the altitude and inclination does not always meet mission needs, so Spaceflight can also help NanoRacks customers that want a higher altitude or inclination through our network of launch service providers,” said Brzytwa.

Alternative methods, including ground-based dedicated small-sat launchers, would come as no surprise as this market develops. According to Brzytwa, Spaceflight Inc. expects existing launch service providers to pay more attention to small satellites as a way to increase profitability and to maximize the use of their vehicles. While NanoRacks may find some of these developments helpful, others would certainly be competition. For now, the company’s primary focus remains on opening up space through the efficient use of the ISS.

“I think the future will hold strong competition and multiple opportunities,” said Manber. “How much further can this market grow on station? Well, we’ve got some tricks up our sleeve we are working on at NanoRacks and we’ll see what happens.”