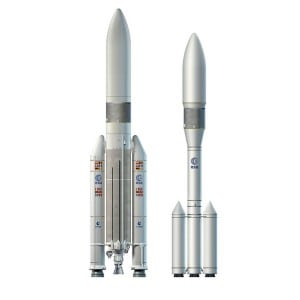 Proposal for an Adapted Ariane 5 ME and proposal for Ariane 6
Photo: ESA-D. Ducros, 2012

[Via Satellite 10-17-13] The European Space Agency (ESA) has awarded three new contracts to Astrium. Running through to the end of 2014, the first two contracts cover the continued development of the Ariane 5 Midlife Evolution (A5ME) launcher for €106 million and the sub-assemblies common to both it and Ariane 6 for €278 million. The third contract is valued at €30 million for the start of development studies for the Ariane 6 launcher, based on the concept selected in July.

“These three contracts will give Astrium’s teams, along with their European industrial partners, the opportunity to build on the substantial amount of work that has already been done on the Ariane 5 ME development, and on the feasibility study for Ariane 6, the design of which has now been finalized,” said Astrium Space Transportation CEO Alain Charmeau.

Astrium will now press ahead with definition and feasibility studies on the future Ariane 6 European launcher. These studies aim to define the chosen concept and architecture of the Ariane 6 launcher and to specify its main characteristics prior to the start of its industrial development, in 2014.

Meanwhile, the development of Ariane 5 ME involves two key objectives: improving the launcher by increasing its payload performance by two tons in geostationary transfer orbit by 2018 and preparing the Ariane 6 launcher.

The Ariane 6 and Ariane 5 ME launchers will both feature the same liquid-propulsion system in their upper stages, specifically the Vinci engine, and largely the same fairing.