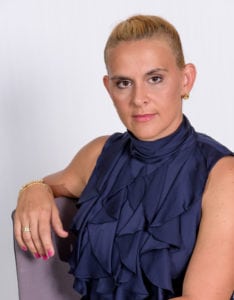 [Via Satellite 11-29-2016] Serbia Broadband (SBB) has used new technology to cut down the numbers of satellite transponders it is using this year to service its Direct-to-Home (DTH) customers in Serbia and surrounding markets. Victoriya Boklag, CEO, SBB told Via Satellite that in May SBB finished migration of its satellite platform Total TV from MPEG2 to MPEG4. The Total TV service is available in Serbia, Bosnia and Hercegovina, Slovenia, Montenegro, Croatia, and Macedonia. As a result, it has now reduced its satellite capacity on Eutelsat 16A from 10 to 7 transponders, at the same time increasing the number of HD channels from 10 to 30 in its offering.

“Our strategy was to replace SD version of the channel with HD, whenever possible. The competitiveness of Total TV offer has increased significantly as it now offers more HD channels in the basic packages than any other big operator in the region. We are working on further strengthening of HD offering on our satellite platform and will most probably require one additional transponder in the next 12 months,” she added.

What Next for Satellite?

With SBB already cutting down the numbers of transponders it is using, and with competition across a variety of technology platforms, the question is how will satellite fare in this part of Eastern Europe? According to Boklag, satellite is not the dominant platform in the region, and even in a market like Montenegro, which she sees as the only country where satellite was dominant until recently, the development of cable and Fiber-to-the-Home (FTTH) offerings means even this situation is changing.

“Broadband is really becoming a commodity; therefore, it is hard for a satellite operator with a single video service to fight off competition with triple play and quad play offers. In order to stay competitive, we remain very aggressive on content offering and bundle Total TV with other services (Asymmetric Digital Subscriber Line [ADSL], wireless internet, fixed telephony) almost on all the markets where we operate in the region,” she added.

SBB offers pay-TV services across a number of platforms including satellite, and has seen good growth this year. Boklag said 2015 was one of its best years of organic growth as SBB successfully used digital switchover to convert Free-to-Air (FTA) viewers into pay-TV subscribers.

“This year we continue to see good growth of unique cable subscribers, but we definitely derive more growth from increasing the penetration of broadband and fixed telephony, especially considering that liberalization of fixed telephony in Serbia happened relatively late in 2012,” Boklag added. “We are expecting the same trend to continue in the next 2 to 3 years.”

Despite a move to more HD channels, Boklag believes it is a little bit too early to start talking about 4K in these markets. “We do not see high demand for 4K yet on our markets. 4K is a natural evolution of HD, but it will take some time for our markets to adapt it,” she added.

SBB is part of the United Group, which is a significant pay-TV company in the region of former Yugoslavia, providing television, Internet, fixed and mobile telephony to a large number of households and offices in the region through its cable, DTH and Over-the-Top (OTT) platforms. In its key markets, the group companies also offer data and voice services, as well as certified managed services to small, medium and large companies.

In 2013, United started its worldwide OTT platform, NetTV Plus, through which it provides pay-TV and fixed-telephony services in the region. U.S. investment company KKR is the main shareholder of United, having acquired a majority stake in 2014. Last year, United had revenues of close to 380 million euros ($403 million).

SBB is definitely seeing the benefits of a more OTT centric approach. “We view OTT as a great tool for the operators and broadcasters to reach new subscribers or expand the current offering with new features and on all devices. By embracing OTT entirely, our group has managed to reach more video subscribers outside our footprint (D3i brand), provide our cable and satellite subscribers with multiscreen feature (D3 GO brand), and address expats in the whole world with the best content from the region (NetTV brand),” said Boklag. “We believe that OTT does bring more competition to your home territory, but at the same time, if you play your cards right with content and technology, opens great opportunities to both operators and broadcasters in gaining new audience and more engagement with your service.”

“They are extremely good at addressing one big niche of the video market — movies, series, kids content on demand. Honestly, we never learned to make money on [Subscription Video on Demand] SVOD services; therefore, we don’t really have ‘big bucks’ to defend in this segment,” she said. However, Boklag believes very few households in the region will decide to abandon sports, local channels, and local content to cut cord with their traditional pay-TV operators. She believes we will most probably see more and more people using SVOD services as complementary to their primary pay-TV subscription. She believes that SBB, as part of United Group, has very attractive offering of its own content — most popular sports channels, news channel, local music production, etc. — and will continue to invest in relevant local content in the future.

“We believe that maintaining a robust and powerful network will be the key to success in the future, and we will continue to invest in network capacity. At the same time, video, especially in a non-linear form, is shifting more and more toward IP; therefore, investment in next generation all-IP or hybrid IP-DVB-C video platforms is inevitable for us in the near future,” Boklag said.