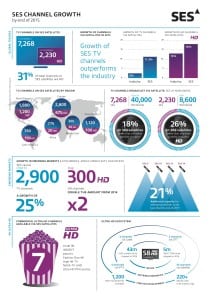 [Via Satellite 01-13-2016] SES announced the transmission of a record number of TV channels on board its satellite fleet as of Dec.31, 2015. SES reports its TV channel count grew by 11.3 percent to 7,268 channels during 2015, compared with an overall growth of 2 percent for the rest of the industry. The company attributes this development to the continued introduction of new High Definition (HD) channels across Europe and North America, as well as the further expansion of SES’ video business across emerging markets. Nearly 60 percent of all channels on the SES fleet are now broadcast in the MPEG-4 compression standard.

The company reported the growth of its global channel count has been particularly pronounced in the emerging markets. SES now carries close to 2,900 TV channels across Latin America, Asia-Pacific, the Middle East and Africa (40 percent of the total of channels). This compares to just over 2,300 channels at the end of 2014 representing a growth of 25 percent in only one year. It also includes a doubling in HDTV channels to more than 300.

These trends have been a consistent driver in the development of SES’ channel count, which has grown by a compound annual rate of more than 9 percent per annum in the last three years. Over the same period, the number of HDTV channels broadcast over the SES fleet has increased by a compound rate of nearly 15 percent each year.