Pay TV in Russia: A New Hot Spot for Satellite

Russia is a market where numbers for pay-TV via satellite are exploding and the demand for satellite capacity is on the increase. The question is, however, as Russia becomes more digitally savvy, what is the ceiling for satellite pay-TV, and can the market continue its impressive momentum? 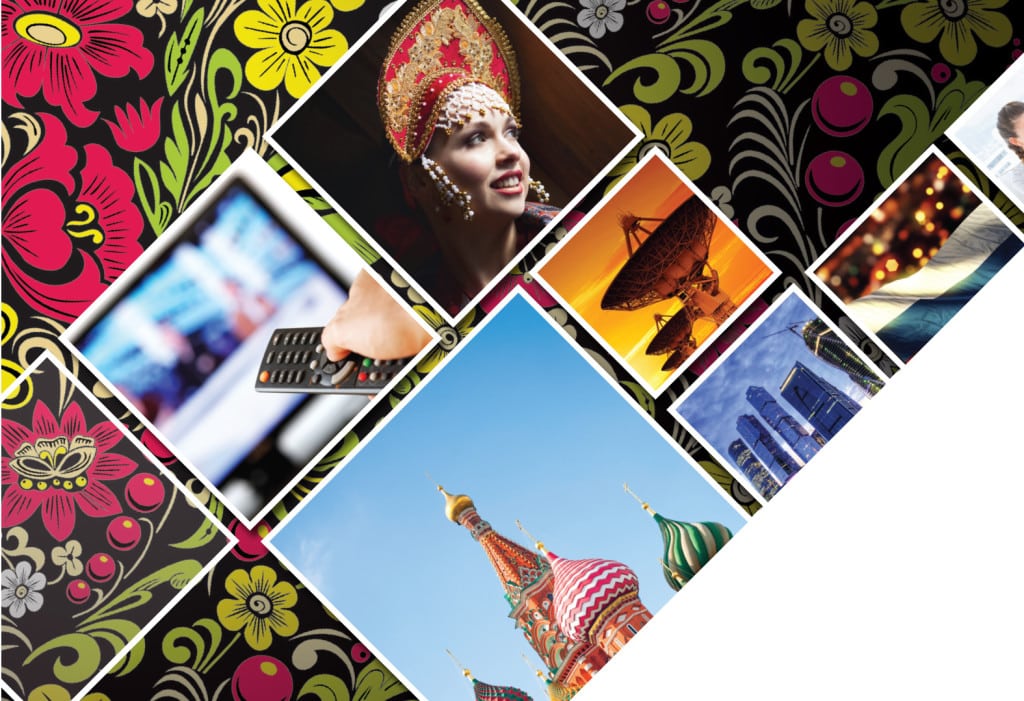 From the likes of Tricolor TV, NTV+, and Orion Express, there is a healthy offer of satellite pay-TV platforms in Russia. They are at the leading edge of providing content to households; whether High Definition (HD), Ultra High Definition (Ultra-HD) or innovative Video-on-Demand (VOD) and Over-the-Top (OTT) offerings. For players all across the satellite ecosystem this is great news as Russia is a vast market with a population of close to 150 million people, eager for the latest digital content.

Tricolor TV is not just a Russian pay-TV success story, but a global one. The company has close to 15 million Direct-to-Home (DTH) subscribers and, according to Igor Kotsarev, technical director at Tricolor TV, the company added almost 800,000 new subscribers in the first two quarters alone this year. But still Tricolor TV has ambitious plans to connect even more subscribers. According to Kotsarev, almost one third of Russians still use outdated terrestrial analog TV, giving Tricolor plenty of potential for growth. He says the company has made “a big bet” on HD as key to its growth strategy going forward. Tricolor TV’s basic package includes 27 HD channels.

Currently, the provider is focusing on a project called “Tricolor TV Siberia;” this pay-TV offering is based on the Express-AT1 satellite, which was launched in March and enabled Tricolor to increase the numbers of channels it was able to offer customers in Siberia.

NTV+ is another key pay-TV provider, which has around 750,000 subscribers in Russia and uses 22 transponders of capacity, five of which cover the eastern provinces. The company has had to adapt to a very competitive market where a price war has broken out — it is now offering basic packages for less than $1 dollar a month, which include 90 digital channels. As a result of targeting the lower end of the market, NTV+ has seen rapid growth. Sin October last year, the company has been seeing growth of more than 20,000 new subscribers per month.

“From the first years of our company, we were positioned as a premium TV provider. Now, we are not only playing in the premium TV market, but we can see the opportunities for our company in the low-end market. This is the basis of the competition right now. Almost all customers now have digital TV. So, they will now start to focus on the best quality for the best price. I think this strategy will show significant progress in the numbers of customers we have. This penetration into the middle and low end of the market is key for us,” says Oleg Kolesnikov, technical director at NTV+.

While the company does not require any new satellite capacity, at some point in the near future, he says it will switch from MPEG2 to MPEG4, or it could even move to the HEVC standard, which could help the operator use its capacity more effectively.

Another player in the Russian market is Orion Express, which has a subscriber base of around 2.5 million. The operator uses a total bandwidth of 630 MHz on three satellites: Intelsat 15, Horizons 2 and Express AM5. Its satellite TV brand “TV Telekarta” offers more than 100 channels to subscribers; these include Russian and international channels, many in HD. Sergey Rozov, director of satellite TV at Orion Express, believes the market will see significant growth over the next year.

“The main trend of the Russian pay-TV market is its growth. According to the company J’son & Partners Consulting in 2018, the overall subscriber base in pay-TV will be 40.9 million households, which is 17 percent higher than the figure in 2013. Penetration of pay-TV services by 2018 will reach 75 percent, while the average growth rate of the market in period 2014-2018 will be 3 percent,” Rozov says.

Even though they have different strategies, all three pay-TV providers are targeting aggressive expansion. “Satellite TV is very popular in Russia, especially in small country towns,” says Kotsarev. “In some regions, particularly in the south of Russia, satellite TV holds more than 70 percent of the total number of pay-TV subscribers … This is due to the fact that Russia, with its vastness, rugged topography and climate, is a hard place to create cost-effective cable infrastructure.”

Russia shares some similarities with Brazil in the sense that it is playing host to some of the major global sporting events over the next few years. It started with the Sochi Winter Olympics in 2014 and next will be the FIFA World Cup in 2018. Russia therefore becomes a key showcase for new broadcasting technologies, and in particularly 4K. Tricolor TV conducted its first Ultra-HD test broadcast in June last year and Kotsarev says that the operator could technically launch its first Ultra-HD channels within the next two years. However, there are issues ahead.

“The main problem is the current absence of 4K content, as well as high prices of 4K TV sets,” he says. “We are permanently in contact with our partners: LG Electronics, Ericsson, and others. The standard for global Ultra-HD has only been approved by the ITU in the last year, so this market segment is still in its infancy. But, yes, we consider that this is a very promising trend. This is the opposite of 3-D TV, which was not popular. Russian companies, which tried to produce and to distribute 3-D TV content, suffered great losses and actually came out of the game. 3-D is popular in movie theaters, for various city shows with 3-D mapping, but it did not work in the Russian TV market.”

NTV+ has also been proactive about 4K. The company transmitted a live 4K broadcast from the Winter Olympics in Sochi earlier this year, and covered the opening and closing ceremonies with live 4K transmissions. It also had dedicated prototypes of set-top boxes showing this content. Kolesnikov says that, while the time for 4K has not yet arrived, it will come soon. He says the operator could potentially launch a 4K channel in Russia as early as next year since he sees more content being available in the near future, particularly sports and movies. However, just as Tricolor TV, NTV+ also sees some challenges.

“Right now, we are limited in every single step of the technological chain. It starts with the production chain, which is right now significantly expensive,” Kolesnikov adds. “It is also very expensive in terms of capacity. Right now, the costs of transmitting one 4K channel using the best profile, you will utilize 50 Mbps for almost one channel. So, that is almost one transponder dedicated to 4K. But, with the new techniques of compression, 4K will start being available to customers.”

And he is confident all the major players in the production market will continue to present new tools for 4K processing. “We have already used devices such as cameras and encoders to do 4K. The next step will be mass development of the HEVC-capable devices in the next couple of years,” Kolesnikov says.

One challenge all satellite pay-TV operators face, not just in Russia but globally, is the growing relevance of OTT content, as people now look to consume media in different ways and at different times. According to Kolesnikov, the OTT market in Russia accounts for less than 5 percent of the overall capacity. However, he says it is an important way for NTV+ to connect with its customers.

“We can see the younger generation are not tied to watching content on the TV, so this will be a really good chance to involve a new type of audience,” Kolesnikov says. “In the next five to seven years, OTT will play a more a significant role, but right now, it is an add-on service.”

According to Rozov, in Russia, more than 34 million households are watching television, about 7 million people use tablets, and around 20 million people use smart phones. “As for viewing TV content, I think the situation will change in the nearest future,” he says. “In any case, using a multiscreen service, we want to give subscribers the ability to watch TV on different devices, as well as at home. People are spending much time on the road, so why not watch your favorite channel at the bus stop or subway?”

However, Kotsarev believes there are a number of factors holding the OTT market back. “OTT technologies are not so popular in Russia due to several reasons, in particular, due to the high level of the pirated content on the Internet. Vice versa, in 2014 the interest to the traditional linear TV increased due to some big sports events: the Winter Olympic Games in Sochi and the Football World Cup in Brazil, as well as news from Ukraine, which incredibly raised ratings of news TV channels,” he says.

It is not just a boom time for Russian satellite pay-TV operators, but also broadcasters in the region. One of the broadcasters expanding its presence worldwide is Russia Today (RT), now one of biggest news channels around. The broadcaster uses a network of more than 30 satellites to support its HD and SD broadcasts, which might be expanded in the next 12 months. The precise scale will be determined by RT’s overall expansion into new markets and/or launching of broadcasting services in additional languages, on top of the current English, Arabic, Spanish and Russian channels. Alexey Nikolov, managing director at Russia Today, outlines the broadcaster’s growth strategy going forward.

“We are looking to the fullest new distribution technologies, such as mobile TV, OTT, multiscreen, and TV Everywhere, while continuing to grow our presence in the traditional television broadcasting markets around the world,” he says. “The main trend is the gradual replacement of linear broadcast with non-linear. Development of various VOD services that can deliver diverse, catalogued content, including HD video, will define the evolution of video landscape in Russia.”

Russia remains an exciting market for broadcasters and pay-TV operators, as the overall market growth shows no sign of slowing. Rozov believes this makes it a ripe market for international players to become a part of.

“The only advice I would give international companies is do not be afraid to go into Russia. This market certainly has its difficulties, but we must remember that it continues developing and growing,” he says. “As for our company, it has distributed satellite TV channels for the past seven years, and from year to year the number of our subscribers is increasing. Russia is a huge country. There is plenty of space for the development of IPTV, satellite and cable. Here all formats will work in the future, and the subscribers will be able to choose how to provide themselves with the TV content.”

Kolesnikov agrees on how the geography is one of the key benefits. “With the size of Russia, satellite will remain the dominant platform. Right now, even for the transmission of digital terrestrial, they are using satellite backhaul for the delivery. In the next five to 10 years, I can see not significant changes in the ratio of the market. The ratio right now is 50 percent cable and 50 percent satellite. I don’t see this changing,” he adds.