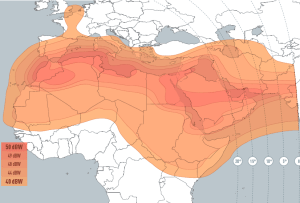 [Via Satellite 09-15-2014] Egyptian satellite operator Nilesat has leased multiple transponders on Eutelsat 8 West B, slated to launch in mid-2015. The deal will expand Nilesat’s operational flexibility and improve signal integrity for client broadcasters in the Middle East and North Africa (MENA) region.

Eutelsat has three satellites at 7/8 degrees west, and Nilesat two, optimized for Direct-to-Home (DTH) broadcasts. Together the companies broadcast more than 1,000 TV channels to more than 52 million homes from this orbital location, with coverage spanning from Morocco to the Persian Gulf.