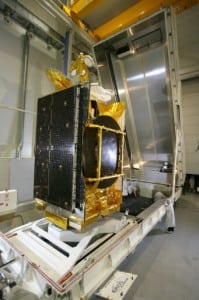 SES’s Astra 3B satellite before launch

[Via Satellite 10-17-13] Nippon Television Network Corporation (NTV), one of the leading commercial broadcasters in Japan, has chosen SES as its satellite operator of choice to provide live transmissions of three key sporting events in Europe.

The capacity contracted on board SES’ Astra 3B satellite was used for the contribution of the World Wrestling Championship 2013 in Budapest, the Japan-Serbia football match and the Japan-Belarus football match over the months of September and October.

“We are impressed with the SES team’s responsiveness to our business needs and their 24/7 availability and flexibility to ensure we will have a flawless live broadcast of the sporting event. The comprehensive coverage of Astra 3B satellite and its high-powered beams make it ideal for us to broadcast these important sporting events from across Europe into Japan,” said Aki Tsuchida, deputy senior advisor, international satellite operations at NTV.