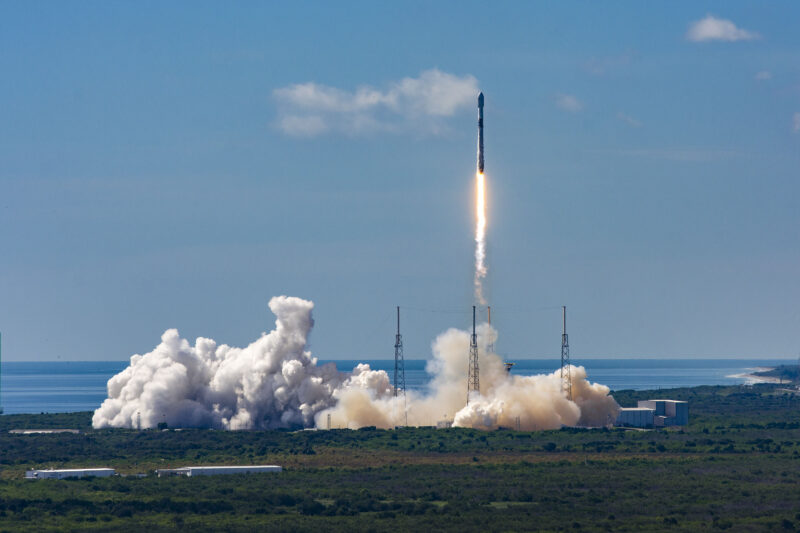 SpaceX launched 58 Starlink satellites on Tuesday, along with three Planet SkySats. The Falcon 9 took off at 10:31 a.m. EST from Space Launch Complex 40 at Kennedy Space Center in Cape Canaveral, Florida. The SkySats were deployed in three maneuvers starting at 12 minutes and 45 seconds after launch, and the Starlink sats deployed 46 minutes after launch. Planet said its missions team made contact with all three SkySats in record time, 18 minutes after liftoff.

These SkySats, numbers 19-21, complete Planet’s SkySat constellation, planned by the SkyBox team in 2009. SpaceX launched SkySats 16, 17, and 18 on an earlier Starlink launch in June.

“These three new SkySats join the 18 others already in orbit and significantly expand our capacity to provide world class, high-resolution images to a variety of commercial, governmental, academic and non-profit organizations,” Mike Safyan, vice president of Launch, wrote in a Planet blog post.

SpaceX reached a reusability milestone with this launch, the Falcon 9 first stage was recovered on the Of Course I Still Love You droneship, marking the first time a booster has completed six flights. In addition, one of the fairing halves was caught by recovery vessel Ms. Tree.

This was the 11th Starlink mission, and the eighth Starlink mission of 2020. With this launch, SpaceX has launched 653 Starlink satellites, including two prototypes. Last month, SpaceX’s Vice President of Starlink and Commercial Sales Jonathan Hofeller joined Via Satellite for a webinar, sharing that friends and family trials for Starlink’s high-speed internet service are underway, and SpaceX looks to begin commercial service in the next couple of months in the northern part of the United States, expanding across the world after.