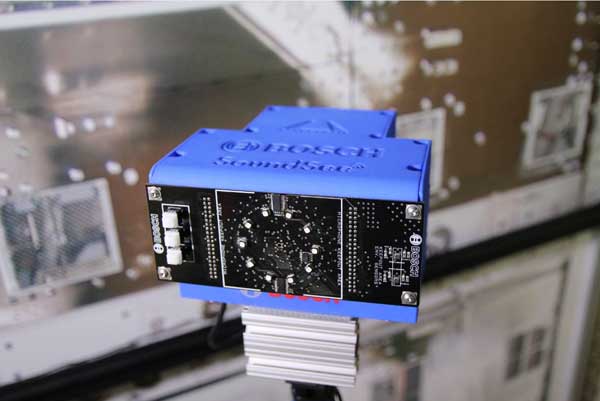 Astrobotic and Bosch revealed the launch of SoundSee to the International Space Station (ISS). As part of a research collaboration with NASA, the lunchbox-sized SoundSee module will assist astronauts by free flying through the space station and using fully-autonomous sensing capabilities to gauge ISS performance and predict when maintenance is needed.
SoundSee launched on Nov. 2 aboard Northrup Grumman‘s CRS-12 resupply mission. Two days later the CRS-12 docked with the ISS. SoundSee will conduct its first experiments starting in early 2020. The expertise gained from SoundSee’s listening technology will be used in commercial applications such as monitoring automotive performance and detecting potential anomalies in manufacturing equipment.
“Thinking further into the future, space stations around the Moon and Mars are going to need these sorts of systems to make sure they’re operating correctly all of the time, even when crew members aren’t on board,” said Andrew Horchler, Principal Research Scientist at Astrobotic and the project lead for the partnership with Bosch.
Scroll for related stories.
Comments
Subscribe