SES Satellite to Host NASA Payload for the First Time 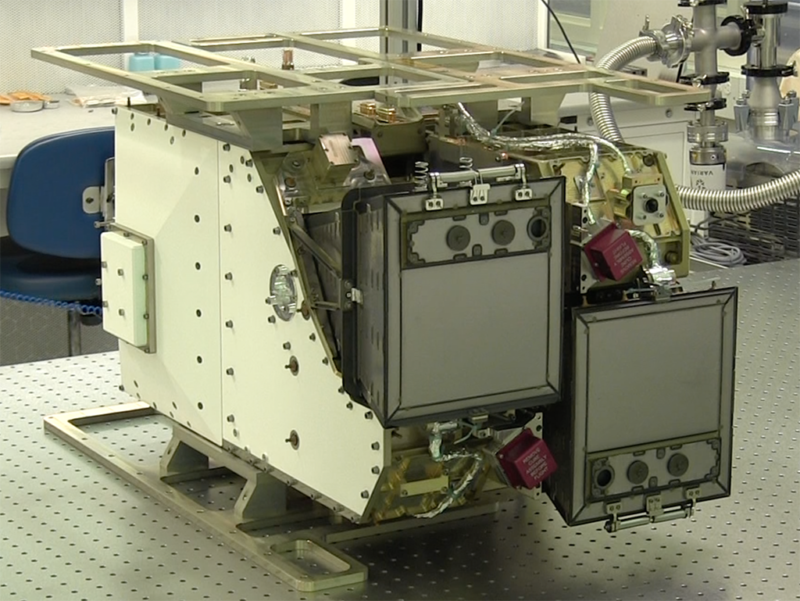 The high-resolution, far-ultraviolet imaging spectrograph for the GOLD mission on a clean-room bench at University of Colorado Boulder’s Laboratory for Atmospheric and Space Physics (CU/LASP). Photo: LASP/GOLD.

A NASA research mission is hitching a ride to orbit on a commercial communications satellite this month for the first time in the agency’s history. NASA’s Global-scale Observations of the Limb and Disk (GOLD) mission, an instrument designed to monitor the upper layers of the Earth’s atmosphere, will operate as a hosted payload on SES’ new SES 14 satellite. Arianespace will loft SES 14 on Jan. 25 from the Guiana Space Center in French Guiana.

GOLD’s primary goals are to improve scientists’ understanding of how the ionosphere interacts both with terrestrial weather from below and solar activity from above. According to NASA researchers, who held a live briefing on Jan. 4, GOLD data will help improve forecasting models of space weather events — such as geomagnetic storms — that can impact satellite transmissions, as well as technology on Earth’s surface.

This is a new area of scientific research, said GOLD mission scientist Sarah Jones. In the past, researchers believed that the ionosphere — which starts about 60 km (37 miles) above the horizon — was primarily affected by the particles the sun flings out into space. While the sun’s radiation certainly influences the way radio signals travel through the atmosphere (and the ionosphere specifically, where charged particles ping around like billiard balls), scientists recently realized that weather activity on the Earth below also causes variations above. Tsunamis, which create oscillations in the air that move upward, are one example Jones highlighted.

What sets the GOLD mission apart from its predecessors is its vast distance from the Earth. “What we wanted to do was get the big picture,” said GOLD principal investigator Richard Eastes. “For years we’ve been studying the Earth’s atmosphere … in detail from the ground and in Low Earth Orbit (LEO). We wanted to back off and get it from Geostationary Earth Orbit (GEO) and look at it all at once. We wanted to get pictures of the [ionosphere’s] temperature, which is something we never had before.”

As such, bolting GOLD’s spectrograph onto another satellite that was destined for GEO, rather than building and launching a custom bus, made perfect sense. Not only can a hosted payload customer take advantage of SES’ ground stations, they can also save “up to hundreds of millions of dollars” compared to procuring a satellite on their own, said Todd Gossett, SES’ senior director of hosted payloads.

“A company like SES [that] owns and operates dozens of satellites has to sustain this fleet by procuring and launching about three satellites per year,” Gossett said. “We’re able most of the time to provide excess size, space, and power that is valuable real estate to a customer.”

SES 14 is meant to replace NSS 806, a communications satellite that lost 12 transponders last summer after an anomaly. Positioned at 47.5 degrees west over Brazil, SES 14’s C-band wide beams will expand the reach of the company’s second cable neighborhood in Latin America, while its Ku-band high throughput spot beams will serve the aeronautical market and other traffic-intensive applications such as maritime, cellular backhaul and broadband services. Its Ku-band wide beams will also contribute to Direct-to-Home (DTH) and Very Small Aperture Terminal (VSAT) services in the Americas and the North Atlantic.

Because the satellite will hover in a fixed position in the sky and has a complete view of the hemisphere, GOLD will boast a 30-minute data collection cadence, allowing NASA to study the ionosphere on a daily basis for the first time.

SES 14 manufacturer Airbus integrated the satellite and the GOLD payload at its Toulouse, France facility last April. Once in placed into Geostationary Transfer Orbit (GTO) by an Ariane 5 rocket at the end of this month, it will take the satellite approximately eight more months to travel to its final orbital slot using electric propulsion.

NASA plans to follow up GOLD with another spacecraft in LEO, the Ionospheric Connection Explorer (ICON), attached to an Orbital ATK LEOStar 2 bus.

While Gossett did not allude to any definite hosted payload contracts for the future, he hinted that such partnerships could prove to be a lucrative new source of supplemental income. “It’s a source of revenue for the company but it also extends our partnership with the U.S. government beyond just communications services, and gets us into new an interesting areas that could be of potential benefit to the U.S. and its partners around the world,” he said.