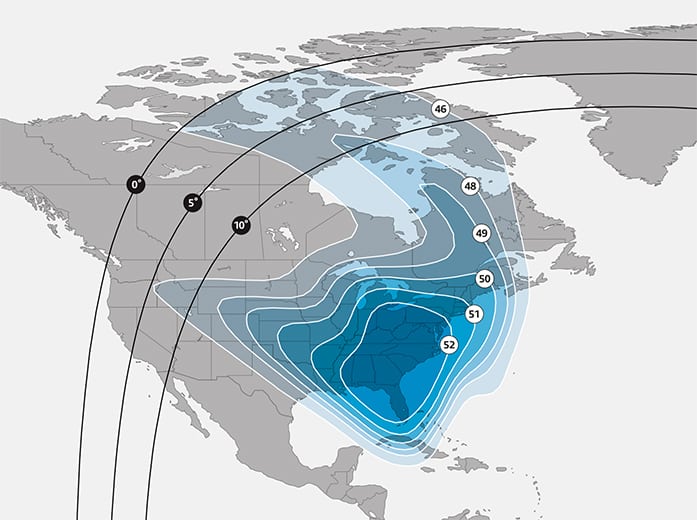 SES has announced a change of launch vehicles and launch slots for its SES 12 and SES 14 satellites. Originally, SES had tasked SpaceX to launch SES 14 on an unclear launch date in Q1 2018. However, to mitigate revenue losses from the failure of two satellites earlier this year, SES has now tasked Arianespace to launch SES 14 in early Q1 2018, while SpaceX will launch the heavier SES 12 on a Falcon 9.

According to SES, the swap of launches will allow the company to bring SES 14 into service a few weeks earlier than planned, and improve service quality and continuity for its customers. Both SES 12 and SES 14 are using electric propulsion for orbit-raising and will enter into service some four to six months after launch.

SES 14, manufactured by Airbus Defense and Space, will be positioned at the 47.5 degrees west orbital . Its C-band payload will replace NSS 806 and will support SES’ cable neighborhood in Latin America. The Ku-band payload augments the Ku-band capacity on NSS 806 with wide beams and high throughput spot beams covering the Americas and the North Atlantic Region.

SES 14’s Ku-band spot beams will allow the company to support the increasing demand for aeronautical and maritime mobility applications, cellular backhaul, broadband delivery, and Very Small Aperture Terminals (VSAT) services for enterprise and government segments. The Ku-band wide beams are designed to provide video and data services in Latin America, the Caribbean, and across the North Atlantic. SES 14 also carries the Global-Scale Observations of the Limb and Disk (GOLD) as a hosted payload for NASA.

SES 12, a very large satellite also manufactured by Airbus Defense and Space, will be positioned at 95 degrees east. The satellite will expand SES’ capabilities to provide Direct-to-Home (DTH) broadcasting, VSAT, mobility and High Throughput Satellite (HTS) data connectivity services in the Middle East and the Asia-Pacific region, including rapidly growing markets such as India and Indonesia. The satellite will replace NSS 6 at this location and will be co-located with SES 8. As the largest satellite ever built for SES, SES 12 is capable of supporting requirements in multiple verticals from Cyprus in the West to Japan in the East, and from Russia in the North to Australia in the South.