Via Satellite May: The Top 10 Quotes 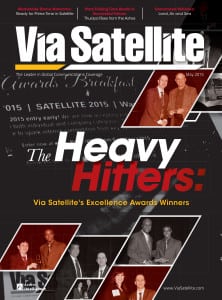 [Via Satellite 04-27-2015] The satellite industry is laden with talent, and in the May 2015 issue of Via Satellite Magazine, we spoke to leaders from all verticals who have made the industry an even more impressive field. Via Satellite’s Excellence Awards covers the industry from big satellites to small, and from newcomers to seasoned veterans.

Via Satellite also delved into the nascent industry of commercial drones, which increasingly seems a little closer to becoming a part of everyday life, and how the satellite industry will play a critical role. Furthermore, in an in-depth interview with Samer Halawi, CEO of Thuraya, Via Satellite’s May issue uncovers the story of how a troubled “on-the-ropes” company turned around to attain a $140 million increase in revenue in 2014, with a Calculated Annual Growth Rate (CAGR) of 72 percent in its equipment business.

As a preview of the recently released issue, we bring you the Top 10 Quotes of Via Satellite May: