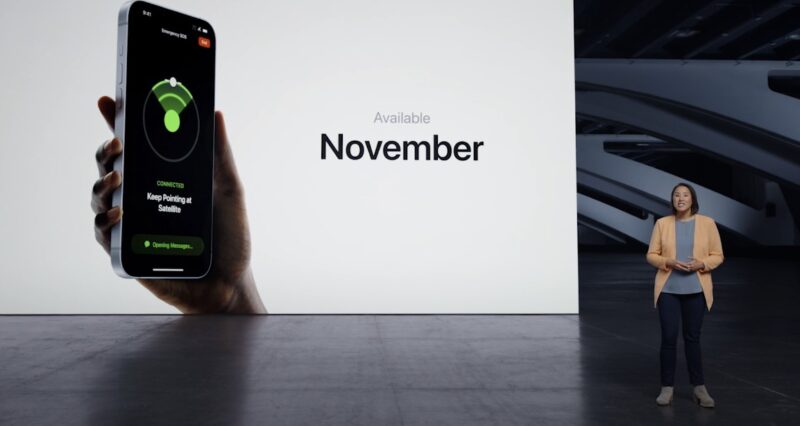 Screenshot of Apple keynote livestream taken by Via Satellite

Apple’s new iPhone 14 will be able to send emergency SOS messages outside the reach of cellular networks, enabled by Globalstar satellite connectivity.

The service will be available on the iPhone 14 in November in the U.S. and Canada. It will be free for two years but Apple did not specify what the service would cost after two years.

Apple announced the service in a Wednesday keynote, and Globalstar confirmed in SEC filings that it will provide the satellite connectivity. Apple did not mention Globalstar by name in the keynote.

“There are some places like winding back roads and mountain ridges that cell towers don’t reach. Connectivity in these areas can be provided by communication satellites,” Williams said. “Typically, the only way to tap into such a network is with an expensive device that uses a bulky external antenna. We knew that approach just wouldn’t work for iPhone. So we invented another way — we designed and built custom components and specific software so that iPhone 14 antennas can connect to satellites unique frequencies.”

Globalstar said it is allocating 85% of its current and future network capacity to support the services and has agreed to prioritize the services on its network.

This news confirms Apple is Globalstar’s unnamed “potential customer” that the operator cited when it placed a $327 million order with MDA for 17 new satellites earlier this year. It also comes after there were reports last year that Apple would debut the emergency satellite messaging feature on the iPhone 13.

Apple has agreed to pay for 95% of the approved capital expenditures with the new satellites in addition to other costs. Globalstar is required to raise additional debt capital for the construction and launch of the new satellites and is exploring capital markets.

Globalstar said that it has completed several milestones with Apple including upgrading its ground network, constructing 10 new gateways, launching a ground spare satellite and in-field testing.

In terms of the user experience, Apple designed a feature that shows the user where to point the phone to establish a connection and stay connected as the satellite moves and created an algorithm to compress text messages so they can be sent in 15 seconds. There is also a series of prompts designed to quickly convey important information to emergency services.

The satellite connectivity can also be used to share a person’s location via the “Find My” app, Williams said.

There is increasing momentum around cellular direct-to-satellite connectivity. Just yesterday, Huawei announced the Mate 50 series will be able to send short texts and utilize navigation with China’s BeiDou satellite network. And last week, Elon Musk announced that the second generation of Starlink satellites will be able to connect T-Mobile’s subscribers in remote locations to fill gaps in T-Mobile’s network. The service could enter beta as early as late 2023 with messaging service.

At least two satellite startups are also targeting this model of “cell towers in space.” AST SpaceMobile is preparing to launch its test BlueWalker 3 satellite to test its space-to-cell technology, and the company has partners with a number of MNOs including Vodafone. Lynk Global has six satellites in space and demonstrated satellite-direct-to-cell connectivity in pre-commercial tests earlier this year and also has partnerships with a number of MNOs.