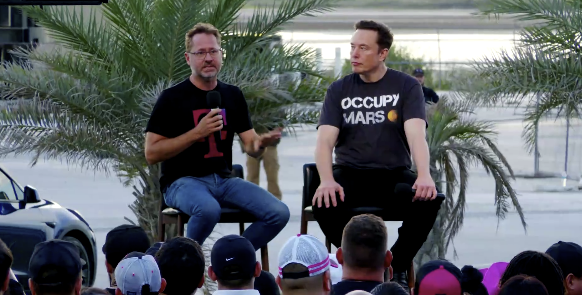 SpaceX and T-Mobile are collaborating to enable satellite direct-to-cell connectivity with the second generation of Starlink satellites. Such a service would close gaps in cellular networks in rural and remote areas and allow T-Mobile customers to send messages via Starlink satellites.

“This partnership is about imagining a future where if you have a clear view of the sky, you are connected on your mobile phone,” Sievert said. “You can connect with your existing phone. That is incredible. It’s a lot like putting a cellular tower in the sky — just a lot harder.”

“It will save lives,” Musk said of the service. “We will no longer read about tragedies that happen where people get lost, and if only they could have called for help they’d be okay. I think what we’re doing here is profound. It’s going to massively improve people’s convenience.”

The V2 Starlink satellites will use a section of T-Mobile’s mid-band PCS spectrum, which T-Mobile owns nationwide and is contiguous. In order to communicate in cell spectrum with cell phones, the satellites will have large phased array antennas, roughly 25 square meters large. These antennas will be supplemental to the Ku- and Ka-band antennas on the satellites.

Overall V2 satellites are much larger, Musk said, and the main body is about 7 meters long. These satellites are designed to launch on the developing heavy-lift Starship vehicle. If the Starship program is delayed, Musk said, SpaceX is working on a “mini” V2 version that fits on the Falcon 9.

Musk said SpaceX has the phased array technology working in a lab and he’s confident it will work in the field. “It’s a hard problem. That’s why it’s not been solved before,” Musk said.

With several details to be ironed out, Sievert emphasized that it is a technology partnership, not a product announcement. T-Mobile has not yet worked with messaging app providers like Apple’s iMessage on tech specifications for individual apps.

Sievert anticipates the service will be free on T-Mobile’s most popular plans and start out with just messaging, but advance to voice calls and eventually, data. He estimates that for more basic plans that don’t include it, the subscription would cost “far less” than the monthly service fees charged by cellular satellite connectivity services, which require specialized phones. Sievert and Musk also emphasized this is geared toward remote areas beyond the reach of cellular networks, not a replacement for cellular networks where they are available.

Sievert also put out an offer to MNOs in other countries for reciprocal roaming. T-Mobile will provide reciprocal roaming if other carriers dedicate mid-band spectrum to the Starlink constellation for this service.

Sievert also hinted this could lead to a mobile backhaul deal with Starlink and T-Mobile.

The “cell tower in space,” in which a satellite is designed to behave like a cell tower, is not exclusive to SpaceX. AST SpaceMobile is preparing to launch its test BlueWalker 3 satellite from early to mid-September to test its space-to-cell technology. The company has partners with a number of MNOs including Vodafone. Lynk Global is also developing a service that can connect satellites directly to consumer smartphones. The company has six satellites in space and has demonstrated the capability to connect directly to phones.

Starlink is a constellation of satellites in Low-Earth Orbit (LEO) that provides broadband internet service in areas where terrestrial options are expensive, unreliable, or unavailable. SpaceX has launched more than 3,000 satellites for the constellation and independent tracking reports that around 2,800 are operational.

The service is currently available in much of the Western United States, and parts of Canada, Europe, and Australia, and has more than 400,000 subscribers around the world. While Starlink has a large focus on direct-to-consumer broadband, SpaceX is in the process of expanding the service to enterprise, maritime, and aviation applications.

The partnership helps regain some momentum for Starlink after the FCC rejected SpaceX’s application to receive funding through the Rural Digital Opportunity Fund (RDOF), saying the constellation “failed to demonstrate” that it could deliver the service that was promised. SpaceX initially was set to receive about $886 million over 10 years, the fourth-highest funding amount. One FCC commissioner is publicly against the decision.

The deal also marks another instance of a major U.S. MNO collaborating with a satellite operator for service. In March, OneWeb signed a deal with AT&T for the MNO to offer its satellite-based connectivity to business customers via cellular backhaul in remote and challenging locations. OneWeb currently has 428 satellites on orbit, which is 66% of the company’s planned first-generation fleet.

In addition, Verizon has a strategic partnership with Amazon’s Project Kuiper satellite constellation to deliver cellular backhaul for Verizon’s 4G/LTE and 5G data networks in rural areas in the future. Kuiper does not have any satellites in orbit and Amazon has revealed few details about the project. Amazon faces a regulatory deadline to have half of its constellation launched by July 2026.