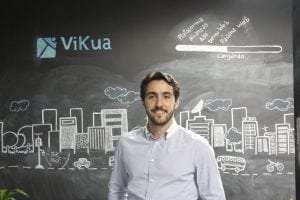 [Via Satellite 06-03-2016] Lower cost connectivity is enabling cities around the world to go “smart,” and Venezuela-based Vikua is one of the companies leading the charge in creating the smart solutions for these cities. The company is one of Latin America’s high profile startups, which made its foray into smart city development five years ago by developing software that allowed local and city governments to manage traffic light infrastructure from a control center and adapt the timing of lights based on available traffic information. Vikua deployed this service in Caracas, the capital of Venezuela, resulting in a 23 percent reduction in travel times within specific parts of the city, according to the company.

From this success, Vikua expanded into public transportation management solutions, security, road safety and more. Five other cities in Venezuela now use the company’s smart solutions, along with two in Ecuador, one in Panama, Bolivia, a state in Mexico, and the national governments of Venezuela and Mexico. In an interview with Via Satellite, Vikua Co-founder and Commercial Director Juan José Pocaterra Mendoza described the company as being past its startup days, but still young overall. He sees a large, trillion-plus dollar global market, of which connectivity will play a major role.

Pocaterra expects to see a lot of rising smart cities that today are small or medium sized, with populations between 300,000 and 3 million people. Based on predictions for population shifts, he said emerging markets could easily become homes to the most future smart cities.

“By the year 2050 you are going to have 60 to 70 percent of the world living in cities, but at the same time, paradoxically enough, where that is going to happen a lot more is in the emerging markets. You have Latin America, Africa, and Southeast Asia — in those markets right now and in 2050 you are going to have even more than 80 percent of the population living in cities. That means that in emerging markets, the smaller cities that are having the fastest growth are the ones that are going to concentrate the new projects, new efforts, and new investments that we are going to see over the coming years,” he said.

Pocaterra said roughly 80 percent of the cities in Latin America fall into this category; however, many of them have severe budget restrictions. Expensive connectivity solutions can be a barrier, which is why Pocaterra said Vikua’s decision to focus on using Wi-Fi and 3G/4G cellular coverage became a quick competitive advantage over those using things like fiber optic.

“As connectivity advances, more cities will become early adopters of these types of technologies,” he said.

Given the demand for connectivity, there is potential for satellite to carve a space in the smart city market, though currently it is second or even third fiddle to other alternatives.

“Cellular coverage tends to be pretty good in cities and other kinds of networks,” Jeremy Green, principal analyst at Machina Research, told Via Satellite. “Satellite, in my experience, tends to be the network of last resort.”

Pocaterra said Vikua has made attempts at using satellite technology, with its robust coverage being arguably its greatest strength, but lamented that the technology is often not cost efficient enough. He listed three different projects where the company sought to use satellite.

The first was with British American Tobacco, which was suffering from cargo theft when shipments left the range of cellular. While satellite did help, Pocaterra said the cost of getting data was very high, which made the customer hesitant to commit.

The second instance was for collecting information from oil sites near the city of Maturín, Venezuela. Though cost was less of an issue here, Pocaterra said the deal failed to materialize. The third opportunity is for satellite in urban planning, but with the use of geospatial data, not connectivity.

“In terms of how satellite connectivity works for how you implement city services, I don’t think it will be an area where satellite will be competitive enough,” explained Pocaterra. “At least not with the technology we are getting from providers like Cisco Meraki, or even Ubiquity. There are a lot of providers working toward giving infrastructure for city connectivity that works very well, and in terms of cost that gives you a lot of leverage when implementing them in comparison to satellite connectivity.”

“The only way municipalities know when their streetlights are broken is when they send people out looking for them — those people are called lighting scouts — and that’s quite an expensive thing to do. If street lights reported when they were broken, then you could save quite a lot of money,” he said.

But when it comes to connectivity, Green said the workhorse is mainly 3G cellular, followed by short-range technologies and narrowband Internet of Things (IoT) programs like Sigfox or the LoRa Alliance.

Pocaterra mentioned projects that require coverage in remote locations as areas where satellite has the advantage, such as those involving safety or security that have high Service Level Agreements (SLAs). Though describing the satellite opportunity in smart cities as small, he said if satellite companies can drive down their costs, they could participate more in a very lucrative market.

“If there was a way to make satellite connectivity a lot more affordable and seamless to implement in a large scale, constantly moving infrastructure, then I think it’s going to be a really interesting field. It’s just a matter of where the technology is,” he said. “If they do get it right, it’s obviously going to be an interesting field of work just because of the size. Forbes calculates that the smart city industry is around $1.3 trillion, and from those $1.3 trillion, almost 28 to 30 percent is about connectivity.”