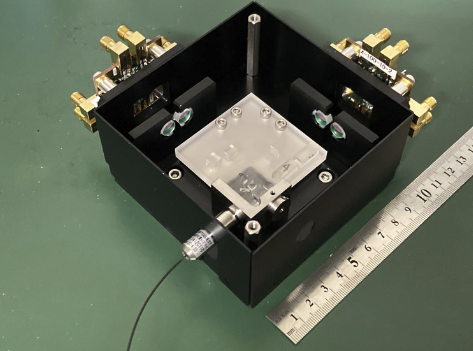 Mitsubishi Electric Corporation announced the development of what it says is the first optical receiver for laser communication terminals that integrates spatial laser acquisition in the photodetector.

The company said this development solves the issue of aligning laser beams with satellites traveling at a high speed to enable optical communications. Mitsubishi Electric detailed the development in a news release on Tuesday with diagrams, explaining that the small optical receiver integrates functions for space optical communication and laser angle-of-arrival detection in a photodetector.

This development results in a downsized optical receiver that Mitsubishi Electric said enables space optical communication with 10 times the speed, capacity and distance of radio-wave communication.

“Since the wavelength is much shorter, smaller antennas can be used in compact communication units that can be installed in locations difficult for optical fiber, such as between buildings. Installations also are possible in areas where normal infrastructure is not available, such as disaster zones, developing countries or remote areas, thereby expanding the use of wireless communications in a variety of situations,” Mitsubishi Electric said.

This follows after last week, the company announced a new technology that can 3D print satellite antennas in space using a liquid resin that hardens when exposed to the sun’s rays .