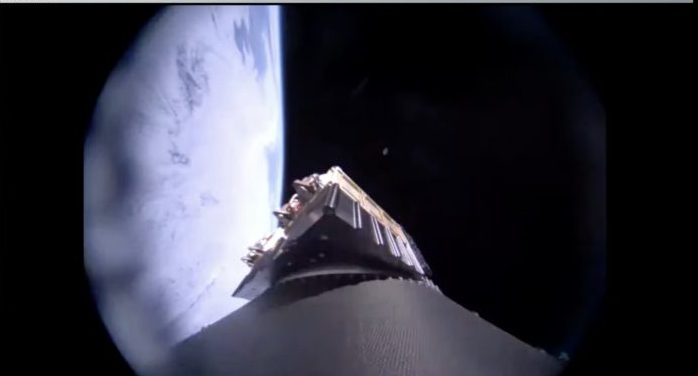 The view from onboard LauncherOne. Photo: Virgin Orbit

Virgin Orbit has kicked off commercial service with a successful LauncherOne mission on Wednesday, June 30.

As part of Virgin Orbit’s air-launch system, carrier aircraft Cosmic Girl took off from a flight runway at the Mojave Air and Space Port in California at 6:50 a.m. PDT. Cosmic Girl, a modified Boeing 747, dropped the rocket at 7:47 a.m. PDT, when it had reached about 45,000 feet in altitude.

Sir Richard Branson and Virgin Orbit CEO Dan Hart appeared on the launch broadcast together, a sign of progress in the COVID-19 pandemic that they could be together in person. At one point, Branson kissed Hart on the cheek in exuberation.

“It’s a pinch yourself moment,” Branson said. “We know the system fundamentally works. There are so many people that need satellites in space, and we’re going to be able to deliver.”

The mission’s name, “Tubular Bells, Part One,” is an homage to Virgin Records‘ history, and the name of the first track on the first album ever released by Virgin Records. The mission deployed three cubesats for the DoD as part of the Space Test Program’s (STP) Rapid Agile Launch (RALI) Initiative. This launch was awarded to Virgin Orbit subsidiary VOX Space by the Defense Innovation Unit (DIU).

In addition, SatRevolution has also moved to expand its relationship with Virgin Orbit. On June 29, SatRevolution and Virgin Orbit announced an MoU for multiple missions to space each year through 2026. The companies also plan to work together on ways to improve the small satellite value chain, and explore joint offerings such as hosted payload services.

This launch comes less than six months after the company reached orbit for the first time in the Demo 2 mission in January, which deployed 10 payloads for NASA’s Launch Services Program (LSP). That demonstration established LauncherOne as the first orbital class, air-launched, liquid-fueled rocket to successfully reach space.

In an interview with Via Satellite after the Demo 2 mission, Virgin Orbit CEO Dan Hart said the company is working to establish a launch cadence of about every other month into next year, and then increase frequency.

“We don’t have a launch pad to clean up recertify,” Hart said. “We have a factory right now that can do about 20 [rockets] a year and the ability to easily go well beyond that, as the market demands. … We’ll just be turning the crank and getting customers to orbit from here on.”

[Virgin Orbit is one of Via Satellite’s 10 Hottest Companies for 2021. Read the list here.]