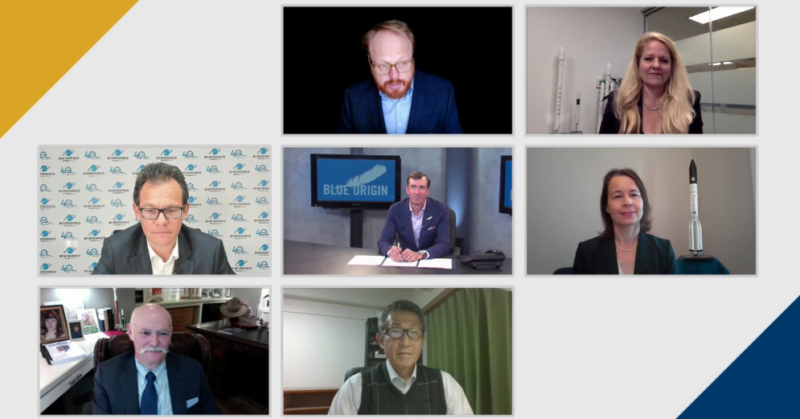 While launch executives from Arianespace, Blue Origin, International Launch Services (ILS), Mitsubishi Heavy Industries (MIH), SpaceX and United Launch Alliance (ULA) differ on their views of how many Geostationary (GEO) satellites will be launched in the next few years, all agree that dedicated smallsat launchers face an increasingly tough market and that not all will survive in the long term.

Speaking at Euroconsult‘s World Satellite Business Week Virtual event, Tiphaine Louradour, president of ILS, said, “For these micro launchers, it could be about addressing more of a government need. We think constellations are focused more on the reliability from launchers. We can offer different vehicles [for constellations]. As we talk about the development of future launch vehicles, the importance of government is key.”

Stephane Israel, chairman and CEO of Arianespace, believes that smallsat rideshare solutions compete in an exciting market, but the overall value of this market remains limited, especially compared to the constellation market. “You don’t need micro launchers to fly satellites to LEO [Low-Earth Orbit]. You have the mass market of constellations going to LEO. There is only one micro launcher successful today. Its success is linked to the DoD. They want quick and responsive access to space. If it is only relying on the commercial market, I think they would have a problem with their business case. If people need quick and responsive access to space, there could be a business case for micro launchers. It is open to question.”

Tory Bruno, president and CEO of ULA believes the shakeout taking place amongst these new launch vehicles will ultimately be good for the industry. He believes that by the middle of next year there will be a more normal launch market, and the rideshare option is here to stay.

“This time last year, we were able to count a huge number of startups for micro launchers,” said Bruno. “Those startup companies were dependent on external investment. There is obviously a lot less now. I don’t expect that market to recover. There is really only room for two to three of these. While it is disheartening to see that investment destroyed, there is some silver lining that this investment has been destroyed earlier rather than later. The fundamental challenge is dollars per kilogram. It is really a niche market.”

Space COO and President Gwynne Shotwell agreed that micro launchers are a tough business and she doesn’t believe there is room for more than two or three micro launchers.

Ko Ogasawara, vice president and senior chief engineer of the Space Systems Division for Mitsubishi Heavy Industries said the launch provider will look to adapt to the changing market and develop more of a capability to launch small satellites.

No dedicated small satellite launch providers participated in the discussion.

In regards to GEO launches, Israel said that Arianespace has recovered lost ground after a tough last two to three years. “A lot of this is due to the C-band opportunity. Thirteen C-band satellites out of 20 satellites in this industry were C-band. It is a rebound, but it is a very specific situation in C-band,” Israel said. “We expect the market to be more at 15 satellites per year. It will be a changing market. Overall the GTO market will be [valued at] two-thirds of what it has been between 2005 and 2015. You will have more diversity in the market going forward.”

But SpaceX’s Shotwell thought this was too optimistic. “I don’t anticipate double-digits in [GEO] satellites orders next year. I would be surprised,” she said.

The impact of COVID was briefly discussed, as some launches have been pushed out and delayed as a result. Bruno highlighted insurance for launches as a key issue. “We have seen commercial missions that have delayed out of this year because of the temporary constriction of the capital markets. Some have moved missions out to get insurance sorted. There have been insurance issues for some of our customers,” he said.

Shotwell said SpaceX has seen some customers delayed, but she isn’t aware that any of those delays were related to capital or insurance. Instead, she cited weather as a major source of delays. “Finding good weather days at Cape Canaveral hasn’t been easy. The number of storms and high winds has been quite impactful,” she said.

Shotwell predicted that 2021 could be interesting because one good thing to come out of this pandemic has been an insatiable demand for bandwidth. She thinks this will allow more telecom operators to think about new satellites and businesses.