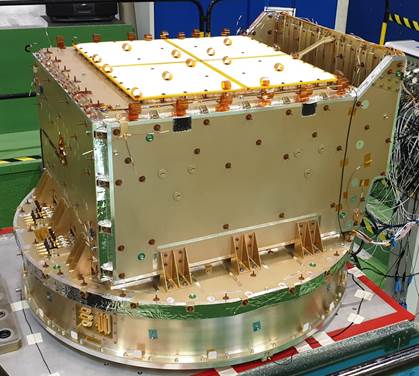 Airbus, The European Space Agency (ESA), and Eutelsat presented the new multibeam active antenna payload today at Airbus in Madrid. Airbus’ ELSA+ (ELectronically Steerable Antenna+) is a first for commercial satellite communications in Europe. The versatility of its performance represents a step change for communications satellites with a spacecraft able for the first time to adapt to the customers’ business cases as and when needed by means of software control.

The electronically steerable reception antenna, works in Ku-band with eight independent reconfigurable beams. In addition, these capabilities can be implemented on each beam either independently or simultaneously including hop up to several tens of predefined different configurations per beam.

“With ELSA+ we are entering a whole new game in satellite telecommunications, this is just a starting point and a reference for future missions,” said Fernando Varela, Head of Airbus Space Systems in Spain, “we are constantly evolving this technology, and Airbus is already developing the future generation antennas for the SPAINSAT-NG programme.”