How SSL Plans to Turbocharge its Satellite Manufacturing Strategy 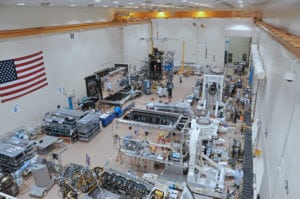 [Via Satellite 07-19-2016] Space Systems Loral (SSL) is taking a multi-year program to streamline operations and optimize the satellite manufacturing process, and turning it into a continuous state of being, according to Executive Vice President of Engineering and Operations Paul Estey. The company has been pursuing an ongoing comprehensive effort to shorten timelines for satellite production — while avoiding quality shortfalls or introducing mistakes — in an effort to both stay competitive among other manufacturers and to enable satellite operators to compete more effectively with terrestrial telecommunications providers.

“We started it in earnest in August of 2014,” Estey told Via Satellite. “We’ve been working on it feverishly for two years and we don’t see an end in sight. This is a continuous improvement effort that we have inside the company.”

“There is some technology, but it’s also the procurement approach to how satellites are architected, designed, built and tested,” he said.

Estey mentioned SSL optimizing its test program to weed out workmanship problems, and employing time-saving methods like limiting testing on reused structures when the design has already been vetted multiple times. He also mentioned using a more automated system to expedite documentation.

“That isn’t really technology, that’s just being smart. We are trying to be intelligent in how we design, build and deliver these satellites,” he said.

The technological half includes processes like increased use of additive manufacturing and automation. Estey said SSL has invested a significant amount of money into automation and has many people working on this effort. The result, he said, is better schedule integrity, enabling the company to deliver satellites on time or early. SSL is pursuing a record number of satellite launches this year. So far, five SSL-produced satellites have launched and eight more are scheduled for missions by the end of the year. Estey said the onus is now on launch providers to stay on track.

Along with this optimization effort, Estey said SSL is also continuing to invest in new technologies such as high throughput technology, low-mass rollout solar arrays, and electric propulsion. SSL received its first award for an all-electric satellite this year from Eutelsat for its Eutelsat 7C. Estey said it is hard to predict if more all-electric orders will follow, but he does expect hybrid electric-chemical systems to gain further popularity.

“Hybrid is more than half of our satellites right now,” he said, adding that SSL has 23 hybrid electric propulsion spacecraft operating today. “I see more and more of that. We have very few solely bipropellant systems now; most have electric involved.”

“Digital payloads are clearly coming into play more and more, and that plays into our notion of trying to standardize our platform and our payloads as much as possible. Digital allows us to do that because the customization becomes, to some degree, software, and a little less on the hardware side,” he said.

Standardized platforms are appealing because they could eventually lead to satellites being pre-built before operators purchase them, and then defined by software on-orbit. Estey also mentioned a NASA Tipping Point program with SSL to develop an on-orbit robotic assembly capability that could further revolutionize they way satellites are procured and operated. SSL is developing robotic systems based on the heritage of its parent company MacDonald, Dettwiler and Associates (MDA) to construct reflectors in space.

“That can lead into on orbit assembly of all sorts of things if you really put your imagination to it,” Estey explained. “It could be antenna systems, payloads, even moving toward the idea of the persistent platform, where we have a long duration bus and add and subtract payloads as you move along. This creates a quicker refresh rate of new generation payloads. This is in the early stages — not something that will happen in the next five years, likely, but it is a very exciting area of engineering endeavor for us.”

SSL’s initial program with NASA is a ground demonstration. The next stage for this technology will be to get it into orbit and demonstrate it on a commercial satellite. 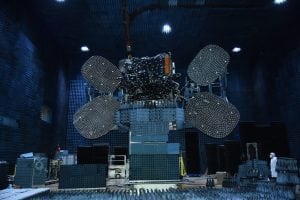 Estey said SSL is finding a lot of interest in Low Earth Orbit (LEO) systems as well. This year the company received orders for eight LEO spacecraft — six for Terra Bella, one from Telesat and one from an unnamed customer.

“We are supporting some of the NewSpace companies here in Silicon Valley — of which there are quite a few — trying to get them up and running, which is exciting for a lot of our engineers,” said Estey.

In geostationary telecom orders, SSL received two this year — Intelsat 39 for Intelsat and the aforementioned Eutelsat 7C for Eutelsat. Estey said SSL is getting “a good number” of Requests for Information (RFIs), along with Requests for Proposals (RFPs) that the company is responding to, but that it remains difficult to predict which orders will go through.

“We have a lot of interest and a good number of RFPs, [but] that doesn’t mean people will necessarily order. I think there has been more proposal activity in the first half of this year compared with the last half of last year. But in the last year or so the procurement process has dragged on, so we don’t know if things will drag into 2017 or be awarded in 2016. It is still hard to tell,” he explained.
Last year was a slow year for geostationary telecom orders. Northern Sky Research (NSR) analyst Carolyn Belle told Via Satellite the research firm counted 19 commercial orders in 2015, compared to 28 in 2014 and 26 the year before. She noted however, that 2011 and 2012 were both below 20, like 2015.

Estey said the reason does not appear related to Ex-Im Bank, which, despite being reauthorized, remains unable to finance most satellite projects due to an incomplete board of directors. He said operators instead are scrutinizing their business plans to ensure they are making the right investments. SSL, he said, is sheltered from some of the fallout related to Ex-Im Bank because its owner is based in Canada, thus giving the company access to Export Development Canada (EDC) as an alternative source of Export Credit Agency (ECA) funding. However, MDA leadership has, in the past, bemoaned Ex-Im Bank’s absence as negatively impacting SSL.