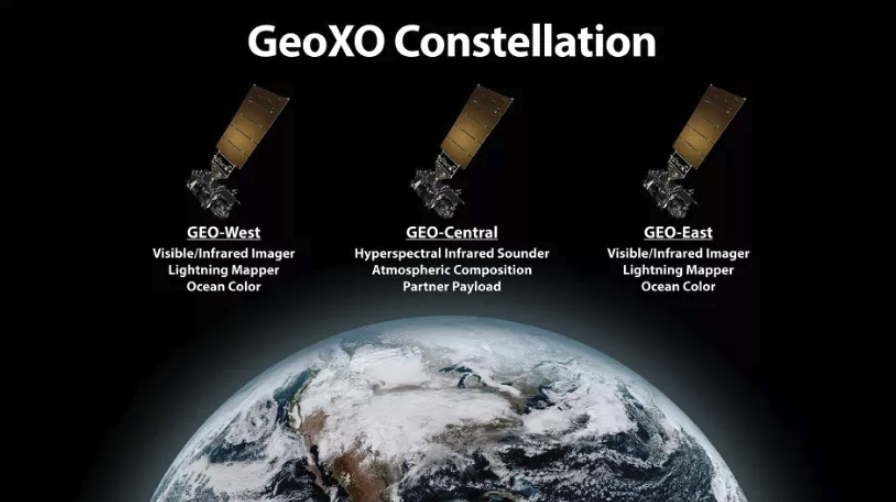 Lockheed Martin and Maxar Technologies have been tasked with developing the concepts for the National Oceanic and Atmospheric Administration’s (NOAA) next-generation GeoXO program. NASA awarded the companies $5 million, 10-month firm-fixed-price contracts for the Phase A Study on behalf of NOAA. The awards were announced July 26.

The GeoXO Program is the follow-on to the GOES-R program — Geostationary Operational Environmental Satellites – and will provide more data to address environmental challenges and support climate operations. NOAA plans for three spacecraft to be in orbit by the early 2030s. Spacecraft in the current GOES-East and GOES-West positions will carry an imager, lightning mapper, and ocean color instrument, and a centrally-located spacecraft will carry a sounder and atmospheric composition instrument.

Lockheed and Maxar have been tasked with ​​developing the spacecraft concept, maturing the necessary technologies, and helping to define the spacecraft’s potential performance, risks, costs, and development schedule. The study will be used to set performance requirements for the spacecraft implementation contract, which is planned for award in 2024.

Lockheed Martin said the GeoXO spacecraft design would be based on its modernized LM 2100 satellite bus, with SmartSat software-defined technology. Lockheed’s contract also includes a study for servicing GeoXO satellites in space so they can operate into the 2050s.

“We’re thrilled at this opportunity to take all we’ve learned – through developing remote imaging capabilities for NOAA’s current lightning mapper and the agency’s GOES-R satellite series – and infuse new technology to build a powerful, weather-monitoring platform of the future,” said Adrián Cuadra, Lockheed Martin’s weather programs director. “We’ve continued to advance this technology, which will help provide more timely forecasts and snapshots of our environment to enable decision-making that makes our world a better place for upcoming generations.”

“Maxar is excited to work on designing NOAA’s next-generation weather monitoring spacecraft, building on our legacy of manufacturing the first-generation and second-generation GOES satellites in the 1970s and 1990s, which operated beyond their expected lifetimes. Maxar is committed to helping customers use spacecraft and space-based data to further efforts to study weather patterns and mitigate climate change, so this GeoXO study contract is the next evolution of that work,” commented Chris Johnson, Maxar senior vice president and general manager of Space.