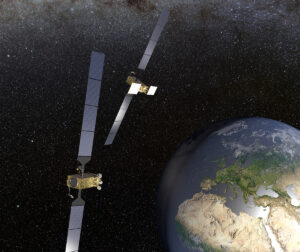 An artist rendering of the SICRAL 3 satellite system.

Thales Alenia Space and Telespazio have won a new deal with the Italian Ministry of Defense (MoD), the two companies announced June 17. It is a follow-on contract for the SICRAL 3 secure satellite communications system and its ground segment.

SICRAL, the Italian System for Secure Communications and Alerts, comprises geostationary satellites for strategic and tactical communications, which support various defense missions, both in Italy and abroad. The new SICRAL 3 system is designed to meet Italian defense communications and interoperability requirements. It will ensure continuity with the current SHF and UHF-band telecom services provided by the SICRAL 1A, 1B and SICRAL 2 satellites, while expanding its range of services with a new Ka-band payload, as well as supporting security, public rescue and civil protection services.

“Thanks to SICRAL 3, Italy and NATO can continue to count on safe, effective satellite communications. Leonardo and Thales, through the Space Alliance, are very proud of SICRAL. It‘s a textbook case of complex space program management and the sterling collaboration between industry and the Ministry of Defense. By continuing this program and expanding the services provided, especially with the new Ka-band capacity and the IW (Integrated Waveform) platform, the Italian Ministry of Defense will deploy the required operational capacity and consolidate its existing partnership with industry on UHF services,” Luigi Pasquali, Leonardo’s Space Activities Coordinator and CEO of Telespazio, said in a statement.