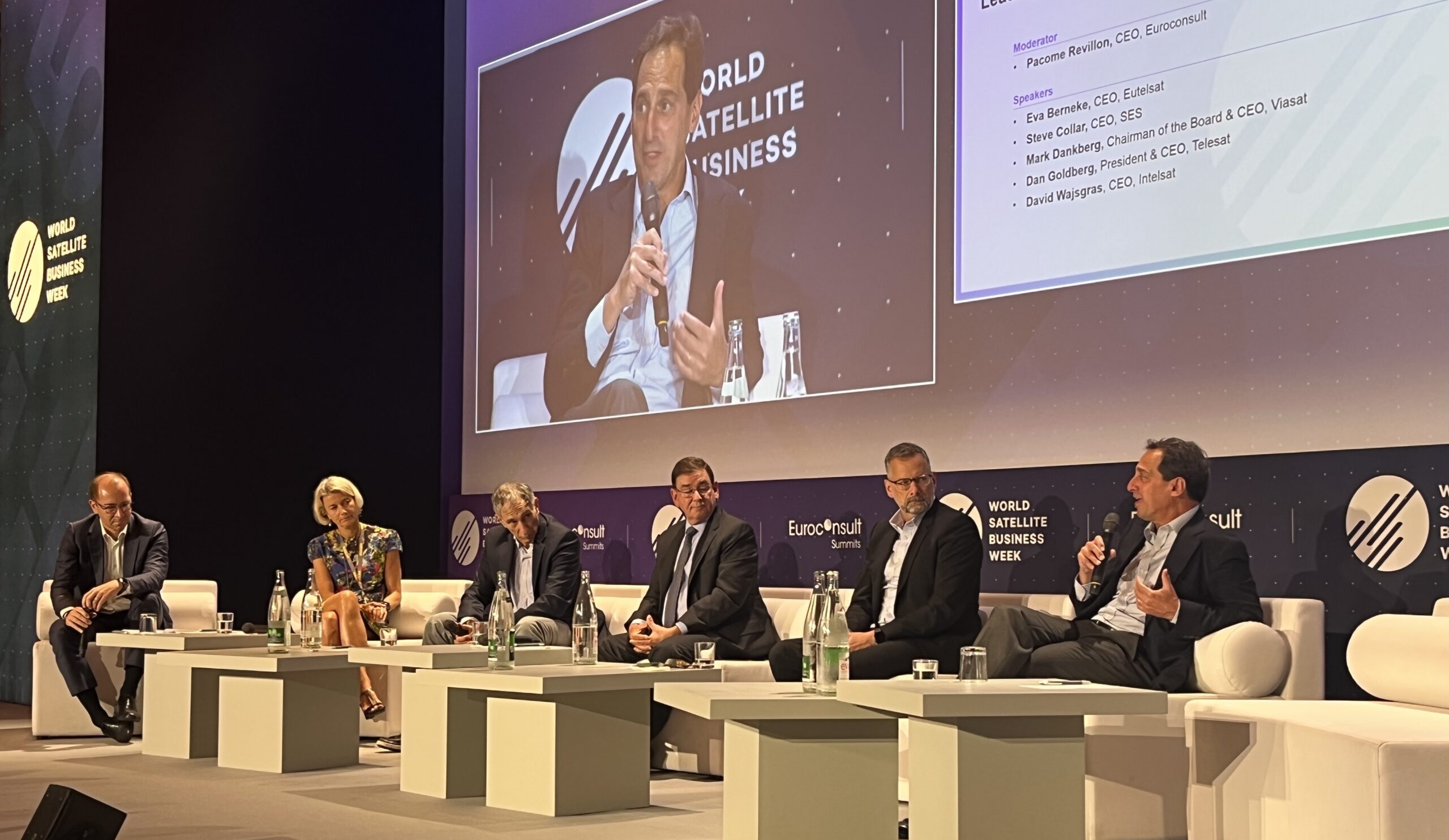 PARIS — The industry’s leading satellite operators are taking stock of their areas for growth and their place in the ecosystem as satellite is becoming a larger part of the global connectivity conversation.

Amid rumors that Intelsat and SES could potentially combine, Intelsat’s new CEO David Wajsgras applauded Eutelsat and Viasat for their bold moves with OneWeb and Inmarsat, but was oblique about Intelsat’s own plans. The Tuesday panel at World Satellite Business Week was Wajsgras’s first satellite operator panel appearance after joining the company in April.

Intelsat is looking at “transformation on multiple levels,” Wajsgras said. “The way the industry looks today with the core players may or may not look the same in the next couple of years. We’re thinking through at Intelsat what’s the best path forward for us and we’re considering various types of opportunities that will help support our growth path. I’m sure I’m not the only one.”

Wajsgras also said there is a good chance that Intelsat will grow revenue this year compared to 2021, after the company has seen declining revenues for more than a decade.

SES CEO Steve Collar did not address rumors of merger discussions. He said that the global economic tightening will affect the satellite industry and he expects the coming decade to be more difficult.

“I think it’s going to put a higher bar on the investments that get made, and it will separate the wheat from the chaff. Those that perform the best will be the ones that progress and those that don’t, won’t,” Collar said. “There’s no question in my mind that the next decade is a tough market environment. The strong need to develop the muscle to be successful.”

Viasat is working through its Inmarsat acquisition and waiting on regulatory approval from the United Kingdom, where Inmarsat is based, CEO Mark Dankberg said. He expects to know in about a month whether the acquisition will be able to close this year, or if it is pushed to next year. Dankberg also confirmed the first ViaSat-3 satellite will launch during this calendar year.

Dankberg said as the industry evolves from the business model of having a small number of large customers to a high number of small customers, Viasat has made M&A choices to get closer to its customers.

“We’ve tried to get deeper into the markets that we think are going to be the end customers. What we found is even within individual industries, different examples have very different strategies, and what they’re looking for is connectivity to support their strategy,” he said. “One of the things that has been happening is too much focus on the technology and not as much on the precise applications and reaching the end customer and measuring how well you did.”

For Telesat, there are a lot of questions about the Canadian operator’s Lightspeed constellation as the company faces delays securing complete funding for the project. Telesat CEO Dan Goldberg said Tuesday that he is “hugely bullish” on its prospects.

“Look, we’ve got a ton of money. When you’re trying to weigh whether a project is going to happen, a thing to do is look at the money,” Goldberg said when he was asked if the constellation will move forward. He referenced cash on Telesat’s balance sheet and backlog, and investments from the respective governments of Canada and Quebec.

“I think we have the most intelligent, efficiently architected Low-Earth Orbit satellite constellation that’s ever been conceived,” he said. “When you put all those things together, it gives us a lot of confidence that we’re going to get the project going. If there’s been anything that has slowed us down it’s the supply chain issues that have impacted a lot of industries. Stay tuned.”

On the back of satellite-to-cell announcements from T-Mobile/SpaceX and Apple/Globalstar, Dankberg said there is “huge opportunity” in satellite-to-cell, but he and Goldberg expressed skepticism about the business cases and spectrum allocations.

“I’m curious what these business models will look like, just how big of a market it is, and who’s going to be paying for it?” Goldberg asked. “Is it the telcos that are going to pay for it because they have regulatory obligations to cover their entire territories? It’s handy to have satellite fill in white spaces, but who’s going to take the risk? I suspect the technical challenges will be met, but it will be interesting to see what these business models are.”

Berneke was more optimistic. From the telco perspective, “direct-to-device is abit of a holy grail in that collaboration,” Berneke said. “Telcos, at least in our experience, have been very good partners also for addressing the digital divide, because telcos actually know where they have holes in their networks.”

She hinted that Eutelsat is interested in connecting different kinds of devices outside of the specialized terminals required for satellite service, and it’s an area that Eutelsat is looking for partners to work with over the next couple of years.

Earlier this week Berneke gave an update on the OneWeb merger alongside OneWeb CEO Neil Masterson.

Collar sees satellite-to-cell as an example of satellite becoming a part of the larger conversation enabled by satellite being included in 3GPP standards. “We’ve talked a lot about taking satellite mainstream as part of broader ecosystems. Whether that be cloud, which is something we’re spending a bunch of time on, or in this case, mobile. Satellite access to mobile is a potentially huge part of satellite going mainstream. It’s exciting times,” he said.