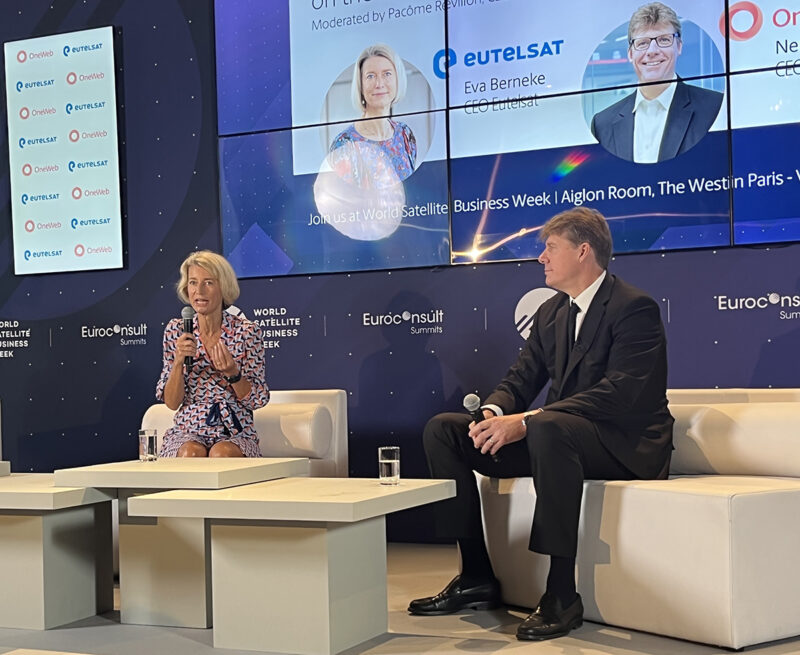 PARIS — Eutelsat CEO Eva Berneke and OneWeb CEO Neil Masterson outlined their vision for their recently announced business merger and pitched the benefits of an integrated Geostationary (GEO) and Low-Earth Orbit (LEO) satellite system during a press conference on Monday at World Satellite Business Week. Berneke said Eutelsat’s stable revenues will be invested in the second generation of OneWeb’s constellation.

“GEO plus LEO will be much stronger. There is a complementarity between LEO and GEO, we see it with customers who want the advantages of both,” said Berneke. “We see it also from a financial perspective where you can leverage the cash flows from a sector which is well mature investing into future networks. Doing it together will better address customer needs.”

Masterson said OneWeb’s customers have been reacting positively to the proposed merger, and the U.K. government supported the deal as a shareholder.

“This industry is transforming and changing very quickly. This is a very natural evolution for us. For the industry, we firmly believe there is 1.5 billion euro growth synergy opportunity. We have an enormous runway together. This is a really good thing for customers. We are the only GEO/LEO combination in the world. This is this is absolutely what customers want, whether they are civilian customers or military customers. This makes the service much more complete, much more resilient, much more sustainable as we go as we go forward.”

Masterson confirmed that OneWeb is in initial service and the company is servicing customers in Alaska, Canada, Greenland, the U.K. and parts of northern Europe. He also said OneWeb expects to complete the rollout of its first generation network next year.

Masterson also confirmed he plans to stay with the combined company, a detail that was not clear in the initial release.

The OneWeb CEO highlighted the synergies of the deal, particularly Eutelsat’s regulatory knowledge. He said, “We see this about OneWeb being able to go much faster. Eutelsat has great distribution points around the world. Regulatory skillsets are very important. When I think about this, Eutelsat has what I call satcom scale, history and understanding of these markets. OneWeb has agility and pace.”

He emphasized that both OneWeb and Eutelsat work with industry partners and the combined entity will be no different, and the combination will impact the whole industrial space base in terms of launch, manufacturing, and ground systems. OneWeb has agreements with other GEO operators including Hughes Network Systems, and Masterson said he expects to continue agreements like that.

One of the key questions facing the combined company will be its plans for its second generation (Gen 2) constellation. The companies plan to give a larger financial update in mid-October with details about the CapEx involved to build Gen 2.

“Compared to Eutelsat/OneWeb, there are lot of [other] projects that are on a powerpoint. We can already sell together. But, we are only scratching the surface of a real seamless GEO/LEO offering. We need to start thinking about integrated terminals, for example. We want to start discussing this with suppliers and customers in the value chain. We are putting the best brains together for Gen. 2. They need to start thinking about this right from the start. It is important to do now.”

Berneke said that the merge will be a change for Eutelsat’s investors, who are used to dividends each year. She said, “It is a big ask for our investors. We have a set of investors that are used to a lot of details. They have a very deep knowledge of Eutelsat. Now, we are doing some kind of turn. So, no dividends for the next three years. They don’t know a whole lot about OneWeb. We need to educate the market.”

In terms of a timeline, Berneke said the focus for the next six months is to put together a request for quote (RFQ) for Gen 2, and have a full design together a year from now. The merger, first announced in July, is still going through regulatory approvals. Berneke said she does not expect to be able to work on integrating the two companies until the second quarter of next year and that further details on the financials of the business combination and a next generation OneWeb constellation will be available in mid-October.

While October will provide some key new details, it is clear both Berneke and Masterson see a large market opportunity for the combined company.

“Demand is not the problem here, Fulfilment is the problem,” Masterson said. “When I think about this merger, these technologies unlock use cases. We want to unlock these large market opportunities. To build a constellation, you need rocket supply, user terminals, spectrum, people, satellites etc. We build our satellites. We have been doing a lot of work on this. This puts us in a great position.”