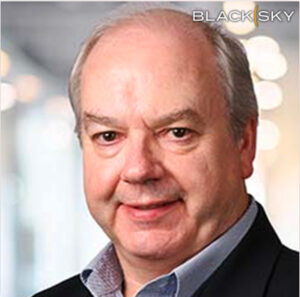 Photo of Henry Dubois, by BlackSky

BlackSky Technology has named its new CFO. The geospatial intelligence company announced June 16 that it promoted Chief Development Officer Henry Dubois, a veteran of the satellite imagery industry, to the position of CFO, effective June 10.

Dubois joined BlackSky in August 2021 to lead the company’s growth and corporate development initiatives after having served as an advisor to the Company’s board since September 2018. He succeeds Johan Broekhuysen, who stepped down from his role as CFO on June 9. Broekhuysen will remain employed at BlackSky until August 11 to support transition efforts.

Before joining BlackSky, Dubois was the CFO at the former imagery company GeoEye, and held several executive positions at DigitalGlobe, president, CFO, and chief operating officer.

“Since joining BlackSky, Henry has been a vital member of the BlackSky executive team and instrumental in the Company’s growth. We are excited to further leverage Henry’s proven leadership in corporate finance and strategic partnerships as we execute our long-term strategy. We want to thank Johan for his contributions and we wish him the best,” said BlackSky CEO Brian E. O’Toole.

In addition to naming its new CFO, BlackSky also reaffirmed its 2022 revenue guidance range of $58 million to $62 million.