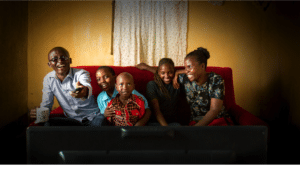 Kenya has more than 12 million households and a TV household penetration rate of only 38.2 percent as of 2015, according to a Research and Markets “Kenya Digital TV Forecasts” report, with free-to-air broadcasting near major cities still the primary access method.

“Solar power has made huge strides. Just a few years ago, a small solar light was new technology. Today we are able to provide a TV and viewing choices that would not look out of place in any major city in the world,” said Azuri Technologies CEO Simon Bransfield-Garth.

Customers pay the top-up rate via mobile money, allowing customers to use the system as much as they want for the credit period. After two years of payments, customers will own the equipment and continue to pay for the satellite service. The service is initially available in selected regions of Central Kenya and will be rolled out progressively nationwide in 2017.