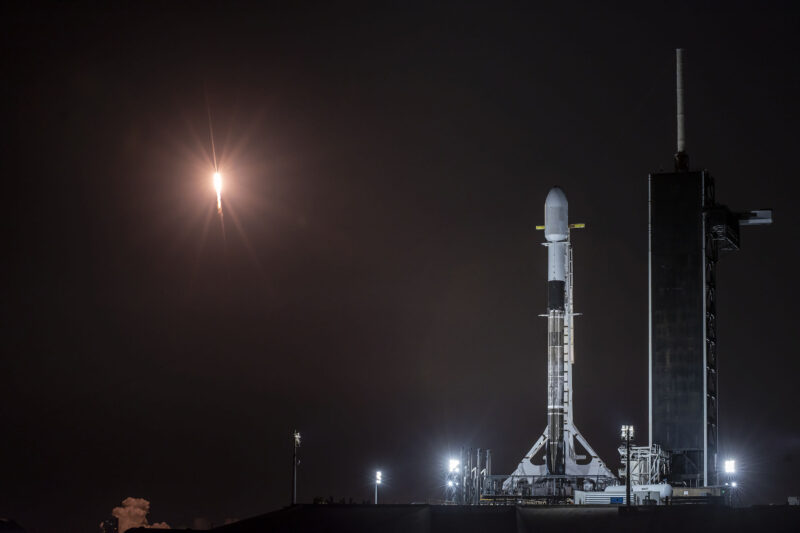 A SpaceX Falcon 9 launches 60 Starlink satellites to orbit on Feb. 4, while the next Starlink mission from pad 39A is on deck. Photo: SpaceX

SpaceX launched an additional batch of 60 Starlink satellites early on Thursday morning to build up its satellite constellation to deliver low-latency broadband internet service from space.

A Falcon 9 rocket took off from Space Launch Complex 40 at Cape Canaveral Space Force Station in Florida at 1:19 a.m. ET. After stage separation, the first stage booster landed on a drone ship about 8:30 into the mission, marking the booster’s fifth launch and recovery. The Starlink satellites were deployed one hour and six minutes after liftoff.

Beta testing is underway in parts of the United States, and recently expanded to parts of the United Kingdom and Canada. More than 10,000 users in the U.S. and abroad are using the service today, Starlink Services LLC, SpaceX’s subsidiary for Starlink, reported in an FCC filing posted on Thursday related to the Rural Digital Opportunity Fund (RDOF).

SpaceX engineer Kate Tice said in Thursday’s webcast that SpaceX is planning to reach near-global coverage of the populated world this year. The beta test costs $99 per month for service, with a $499 user terminal, and SpaceX has said users should expect data speeds of 50 Mbps to 150 Mbps and latency from 20 ms to 40 ms in most locations.

SpaceX is targeting an aggressive launch pace for the Starlink constellation, and plans for another Starlink launch on Friday morning from its launch pad at the Kennedy Space Center. In Thursday’s webcast, the two Falcon 9 rockets could be seen stood up near each other on their respective pads.