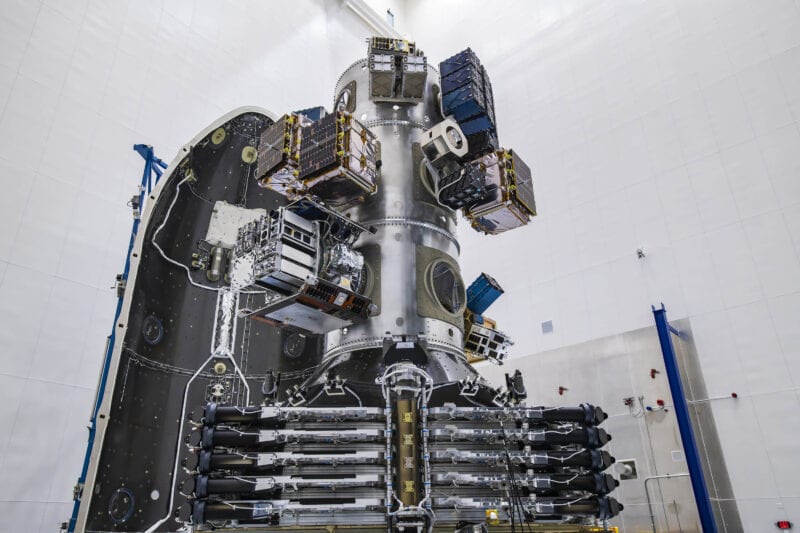 A photo of SpaceX’s rideshare payload stack with Starlink 10 satellites at the bottom. Photo: SpaceX

“All sats launched next year will have laser links. Only our polar sats have lasers this year and are v [version] 0.9,” Musk tweeted on Monday.

A Twitter user noticed a difference in a photo of the stack of 10 Starlink satellites deployed on Sunday’s Transporter-1 rideshare mission, and asked Musk if an object that looked like a black pipe was lasers, which he confirmed.

The 10 Starlink satellites launched Sunday were the first deployed to Polar Orbit, in order to provide broadband service in Alaska and polar regions. Musk also tweeted that the laser links between the 10 satellites mean that no ground stations are needed over the poles.

Laser communications transmit data via a light laser between two terminals, and are more secure than Radio Frequency (RF) terminals which can be jammed. This technology can also be helpful for Low-Earth Orbit (LEO) constellations like Starlink because data can be transmitted between satellites in the same plane, which can lessen the burden on ground infrastructure.

SpaceX has talked publicly in the past about targeting laser links for Starlink, which it is building to provide broadband internet from space. In September 2020, SpaceX reported it completed a test of two satellites in orbit equipped with inter-satellite links. “With these space lasers, the Starlink satellites were able to transfer hundreds of gigabytes of data. Once the space lasers are fully deployed, Starlink will be one of the fastest options available to transfer data around the world,” Kate Tice, senior program reliability engineer said at the time.

And in a July 2020 webcast with Via Satellite, Jonathan Hofeller, SpaceX’s vice president of Starlink and Commercial Sales, said the company was aggressively targeting inter-satellite links, but cost was a concern.

“We have to make sure it’s cost effective in order to provide it and implement it into the constellation. That’s something we are attacking internally and aggressively and it’s something that we know will greatly enhance the system, both for consumers and enterprise customers, and our government customers as well,” Hofeller said in July.