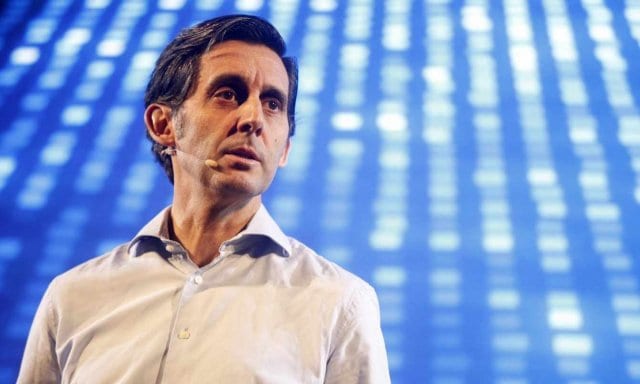 The rise and rise of Artificial Intelligence (AI) was at the heart of many keynote presentations on day one of Mobile World Congress (MWC) in Barcelona. José María Álvarez-Pallete López, chairman and Chief Executive Officer (CEO) of Telefonica — one of the world’s biggest telcos — spoke of how networks will get smarter as they become AI-driven. He gave the interesting statistic that mobile data traffic is growing at more than 50 percent every year, and said no other sector comes close to this level of growth.

Interestingly, he was one of the speakers that urged governments not to look at 5G as a cash cow. “Why do we need to acquire the same spectrum over and over again? We need a refresh, and a bold regulatory approach,” he said. “The aim of regulators should be to reduce regulation. Governments are using spectrum as cash generators. Spectrum needs to be awarded for a longer period of time.”

López spoke of the new global data sphere, and how we are flooded with data. However, he spoke of how this data revolution could help revolutionize sectors such as transportation and health, and how data now powers “information factories.” “People give it (data) away in exchange for free services. Data should be treated as a new factor of production. Data is like dignity. It has its own value. We need a data bill of rights. This will take a forward-looking approach. In Telefonica, we want to put customers in control of their data. We are working on a data portability model for our customers,” he said.

He also spoke of telcos being responsible business spreading the benefits of intelligent connectivity. “We need to have more sustainable business models. We need to do business in a financially, in socially responsible and environmental way. The opportunity is amazing,” he said.

Another company that spoke was SingTel, an Asian telco, that has spread far beyond the boundaries of Singapore. Singel CEO Chua Sock Koong stated that mobile connectivity transforms the life of billions. The statistics she gave were quite mind boggling. More than two thirds of people are now connected to mobile. There are 8.8 billion mobile connections. There are 3.3 billion mobile internet users, There will be 1.3 billion 5G subscribers in 2025. 5G goes beyond just connecting people — it makes Internet of Things (IOT) applications a reality. There will more than 25 billion global IOT connections by 2025, and data-driven value creation will reach $4.6 trillion.

However, while Chua talked about the potential opportunity for telcos, she spoke with a degree of caution similar to Lopez. “Mobile revenue growth is stagnating even if data growth is growing rapidly with 400 percent data growth by 2025. There is subdued mobile revenue growth on mobile operators who are investing billions on new networks. There is a dichotomy taking place here,” she said.

GSMA Director General Mats Granryd spoke of the benefits of 5G and said that the industry needed to move beyond just connectivity to “intelligent connectivity.” Although he spoke about its applications in several areas, he highlighted how AI and intelligent connectivity can help in healthcare He said, “Tuberculosis kills more than any other disease in the world — 2000 people will die today from it. With Big Data, we can predict where the next outbreak will happen, and put up treatment centers. The possibilities for intelligent connectivity are endless. Doctors can also perform real time remote surgery.”

Like others, he urged governments around the world not to engage in a short-term land grab. “If the mobile ecosystem would be a country, we would take the place of Germany as the fourth largest in the world,” he said. “We are at the heart of the global industry. We need a framework for the digital age. Our message to governments is: don’t get short-term greedy and kill the golden goose.”

The European Commission (EC) Digital Economy and Society Commissioner Mariya Gabriel spoke of her ambitions to make Europe a global leader in terms of 5G and AI. She said that the EC has supported investments in research. “We have set-up a large scale European 5G piloting structure. European operators will launch 5G services commercially this year. Europe has to keep pace with other regions,” she said.

Gabriel said she was “well aware” of the unrest with the key actors in telecoms players around cybersecurity. She also said it was the EC’s intention to give a major boost to AI related research and innovation. “We want to reach $22.6 billion (20 billion euros) in AI-related investment,” she said.

Not surprisingly, satellite wasn’t mentioned at all during the first morning. However, reading between the lines, telcos are using statistics to show their need for spectrum. All were talking about the inflection point of 5G, AI, blockchain, and Big Data leading to the biggest revolution of modern times. However, with wireless players hinting at how they need to make more profits from their huge investments in 5G, the stage is set for an interesting few years ahead. There is no doubt that the fusion of AI and 5G in this new data world will lead to new digital economies where more digital skills will be needed. The new industrial revolution is happening. The question is — what role will the satellite industry play in this revolution? That is to be determined.