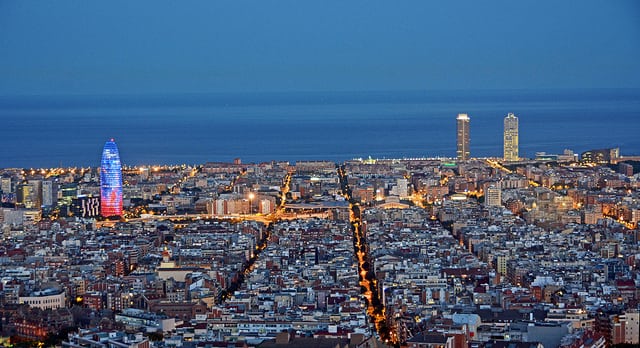 The skyline of Barcelona, Spain in 2013. Photo: Flickr/cpcmollet.

Hispasat announced its participation in a team of companies that will perform testing on the design of hybrid networks, which will provide 5G services for mobile telephone networks in the future through a more efficient combination of different space and terrestrial technologies.

The 5GBarcelona initiative, announced at the Mobile World Congress, aims to convert the city into a living lab which will experiment with the implementation of new infrastructures necessary for the deployment of 5G connectivity in its different uses and verticals. Within this initiative, Hispasat will participate in a European Commission proposal, still in evaluation stage, which could be financed through the European Union (EU) 5G-PPP Program.

One Hispasat satellite will form part of this project, with the aim of testing and approving performance indicators established as standards. It consists of an R&D initiative led by the i2CAT Foundation in which organizations such as the Telecommunications Technological Centre of Catalonia (CTTC), the Polytechnic University of Catalonia (UPC) and Huawei will participate. The pilot will serve to integrate satellites as an additional component to future 5G architecture and will demonstrate that the 5G satellite-terrestrial combination can make the distribution of video more efficient by means of code caching techniques, in addition to testing the support of said integration by means of network function virtualization.

It will also validate the ubiquity indicator for extending the range of 5G services to areas with poor connectivity, or with none at all. The use cases the initiative will study are related to connected cars, smart cities, connected hospitals, public safety, and immersive virtual reality, and data on speed, latency and performance of different technologies will be tested, as well as improvements in efficiency that will allow for the combination of these elements. Work is to begin in once the program is approved by the European Commission, and a demonstration in Barcelona can be expected for 2019.

Hispasat is also actively participating in other European projects focused on the development of the future generation of 5G mobile services, such as the NRG5 Project, the aims of which include, among others, predictive maintenance of the electric distribution lines and gas plants by using drones. In this case, Hispasat will provide connectivity to link the remote base stations to the control and operations center, to which data collected by the drones will be transmitted, and it will analyze the requirements and precise architecture of the networks for this service.

Hispasat is also part of a group of 16 companies from the satellite industry which signed a joint statement with the European Space Agency (ESA) in 2017 to collaborate on the project known as Satellite for 5G. As part of this initiative, the development of which is expected for 2018 to 2020, the ESA and satellite operators, service providers and manufacturers will work together on testing 5G services, transversal activities and their scope.