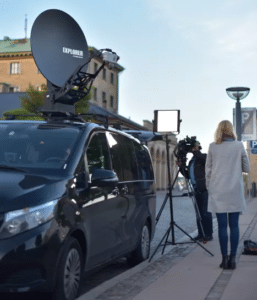 Cobham Satcom has announced that an Inmarsat Global Xpress (GX) variant of its Explorer 8100 stabilized, auto-acquire, drive-away antenna system will be available for broadcast users before the end of this year. The new Explorer 8100GX expands Cobham Satcom’s Explorer 8000 series, which already includes 1 and 1.2 meter antennas for global Ku-band satellite services and Eutelsat’s Ka-band NewsSpotter solution.

Currently undergoing Inmarsat Type Approval testing, Explorer 8100GX features dynamic pointing correction technology, which enables a high degree of pointing accuracy. According to Cobham, it can adjust in milliseconds to compensate for the vehicle it is installed on rocking on its suspension, giving broadcasters the ability to transmit live, High Definition (HD) multimedia without interruption from anywhere in the world and in almost any weather conditions.

The system enables a stable link to the Global Xpress network in winds up to 112 km/h or when people enter and exit the vehicle. The stabilization technology is even more important on the High Throughput Satellite (HTS) Ka-band frequencies used by Global Xpress, which require better pointing accuracy than Ku-band services to maintain a stable, high-bandwidth link to the satellite.