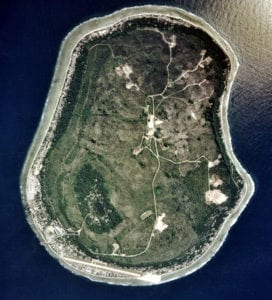 Aerial view of the island of Nauru. Photo: Wikimedia Commons

[Via Satellite 12-14-2016] Digicel Pacific has signed an agreement with O3b Networks to increase satellite capacity and bring mobile connectivity to the remote Micronesian Island of Nauru. With this boost in O3b’s connectivity service, Digicel Pacific has deployed 4G/LTE mobile services, supporting the island of Nauru in driving significant economic and social development through enhanced mobile services.

The Republic of Nauru is the smallest state in the South Pacific, with approximately 10,000 residents populating a 21 square kilometer area. With its closest neighbor settled nearly 300 kilometers to the east, Nauru is incredibly remote and far beyond the reach of traditional fiber connectivity. Digicel Pacific has been providing connectivity over the O3b satellite-enabled network to the island since January 2015, and has since upgraded its bandwidth by 108.6 percent over a series of three upgrades.

“At Digicel we pride ourselves on offering our customers best-in-class services, and that’s what they’re getting with 4G/LTE connectivity,” said Digicel Regional CEO, Yvonne Steele. “We have been able to upgrade with O3b three times because of the extraordinary adoption and increase in data usage we’ve seen throughout the region so far. Residents of Nauru and island nations throughout the Pacific are eager to take advantage of global innovations, and we are proud to connect them with those opportunities.”