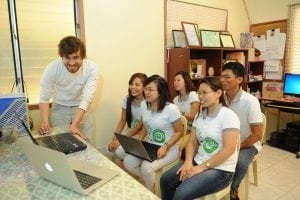 Satmed in the Philippines. Photo: SES

[Via Satellite 07-22-2016] SES, the Luxembourg Ministry of Foreign and European Affairs, and Non-Governmental Organization (NGO) German Doctors have launched Satmed, the satellite-based e-health platform, in the Philippines. German Doctors’ hospital in Buda, Marilog District, Davao City, is using the service to enhance healthcare provision and deliver accessible e-health services to remote communities on the island of Mindanao.

Using Satmed, teams can use portable devices such as tablets to collect patient data, which is then processed, aggregated and synchronized securely on its cloud platform. Satmed’s text messaging functionality will allow doctors to keep tabs on large groups of patients living in remote villages, whose main form of contact with the outside world is through mobile phones.

Satmed will also enable German Doctors to communicate with doctors and medical experts around the world via video conferencing. Training of local medical professionals via the platform’s e-learning solutions will be another opportunity.

German Doctors is one of the partner NGOs of Satmed during the ongoing pilot phase. SES Techcom Services, a wholly owned subsidiary of SES, developed the platform, which the Luxembourg Government is funding.