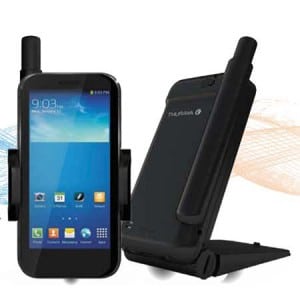 [Via Satellite 09-18-2015] Thuraya Telecommunications has released a new generation of SatSleeve models, the SatSleeve+ and the SatSleeve Hotspot. The SatSleeve+ features a new voice routing system that improves on sound quality, and can be used with a wider range of smartphone models than before. The device comes with a universal smartphone adaptor to reach a larger number of smartphone owners than was previously possible. The adaptor also allows users to switch between handsets, so owners of more than one smartphone do not need to buy additional kit.

Both models enable users to make calls, use messaging applications, update social networks, send and receive email and SMS, and access apps. They also come with a programmable SOS button that works even if no smartphone is connected.