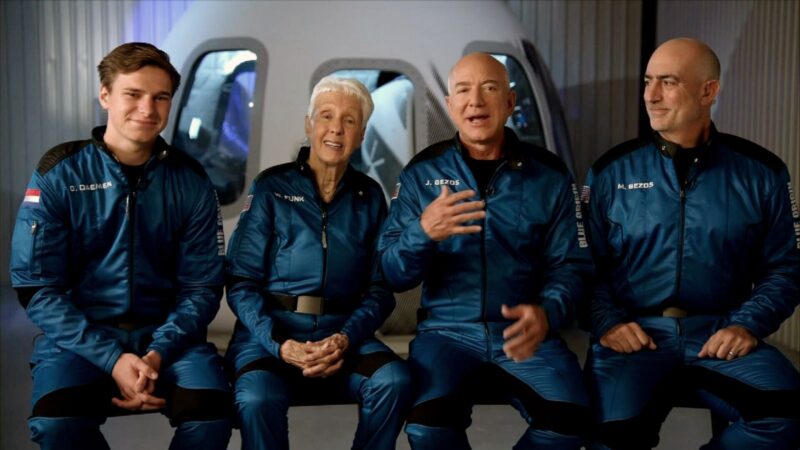 “People keep asking me if I am nervous. I am not really nervous. I am excited. I am curious,” Bezos told CBS News‘ Gayle King. “I want to know what we are going to learn…. We’ve been training, this vehicle is ready, this crew is ready, this team is amazing. We just feel really good about it.”

Bezos brought worldwide media attention to the first crewed New Shepard flight when he announced that he and his brother Mark would be passengers.  The news brought renewed focus on Blue Origin’s auction of a seat on the rocket, as the prize now included sharing a historic moment with one of the world’s richest citizens. After some mystery surrounding the identity of the auction winner (and a scramble after the company said the initial winner had “scheduling conflicts), the prize eventually went to 18-year-old recent high school graduate Oliver Daemon, who will be the youngest ever to go to space.

The Bezos brothers and Daemon will be joined by a legendary pilot and aviation pioneer – 82-year-old Wally Funk, who will become the oldest person to fly into space when she rides on New Shepard. Funk, a member of the Mercury 13 female astronauts who were selected by NASA but never flown on a mission, was also the first female air safety investigator for the National Transportation Safety Board and the world’s first female Federal Aviation Agency inspector.

“I love being here. This is the greatest team that I could ever be with, and it’s going to go — it’s going to happen,” said Funk. “I’ve waited a long time, but I’ve dreamt a long time to get to go up.”

Blue Origin’s build-up of the New Shepard launch was unexpectedly interrupted by a July 1st announcement from Virgin founder Richard Branson that he was going into space more than a week before Bezos. Branson eventually made his voyage into space on July 11, when Virgin Galactic’s SpaceShipTwo VSS Unity reached space in a pre-commercial, test flight.

The two companies soon after engaged in a messaging war over what it technically means to “go into space.”  Blue Origin released an infographic ahead of the Virgin Galactic flight, comparing the two experiences in terms of distance, escape system, and even the size of the windows. “From the beginning, New Shepard was designed to fly above the Karman line so none of our astronauts have an asterisk next to their name,” the company tweeted.

Regardless, New Shepard’s groundbreaking launch on Tuesday represents the end of an even longer race to test and perfect the highly anticipated rocket, which Blue Origin hopes will become the gold standard for human space flight.