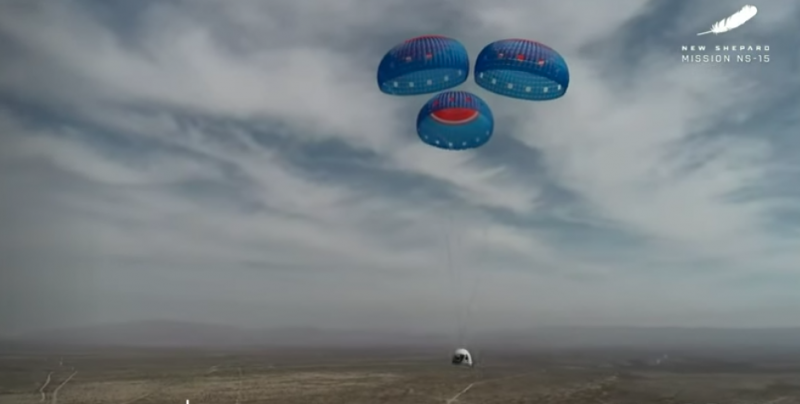 Blue Origin conducted a successful launch of its New Shepard rocket and crew capsule on Wednesday, as a verification step for the vehicle and operations before it will fly astronauts.

Before liftoff, Blue Origin personnel stood in for astronauts and entered the crew capsule. They demonstrated climbing the launch tower, buckling into the seats and conducting a communications check. The astronaut stand-ins exited the capsule prior to launch.

“While there are no astronauts on board today, that was a critical step in our march toward our first human flight,” Ariane Cornell, Blue Origin’s director of astronaut and orbital sales, said during the launch webcast.

After a few holds, New Shepard took off at 12:51 p.m. ET from the launch site in West Texas. During the roughly 10-minute mission, the rocket reached 2,234 mph max ascent velocity. The crew capsule reached an apogee of 347,574 feet above ground level. The booster successfully landed 7:20 into the mission and the crew capsule followed after, touching down 10:10 into the mission.

“I think that was one of the smoothest landings I’ve seen of this rocket, it almost looks unreal,” Cornell commented in the launch broadcast.

This was the 15th New Shepard mission for Blue Origin, the commercial launch service of Amazon Founder Jeff Bezos. The New Shepard is a reusable suborbital rocket designed to take space tourists and research payloads to the edge of space. The last New Shepard launch prior to Thursday’s mission was NS-14 in January 2021.

Editor’s note: This piece has been updated with the official mission statistics.