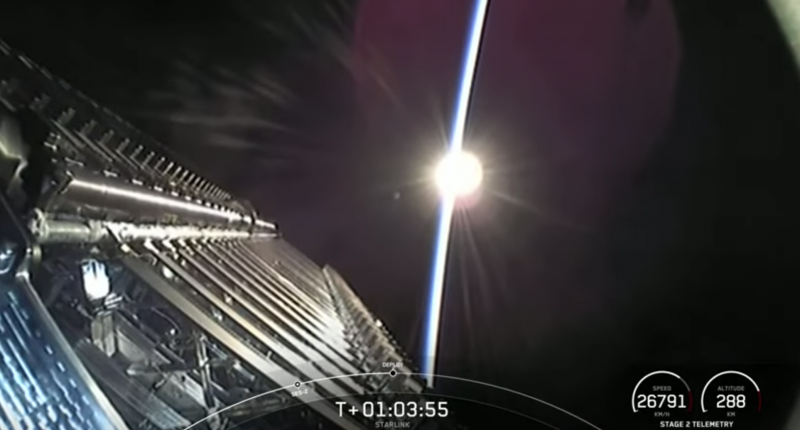 SpaceX continued its rapid launch cadence for Starlink missions, launching the fourth batch of satellites this month in an early morning launch on Wednesday. A Falcon 9 rocket carrying 60 Starlink satellites took off from Launch Complex 40 at Cape Canaveral Space Force Station at 4:28 a.m. on March 24.

Stage separation occurred about 2:30 into the mission. The first stage booster had a successful landing on a drone ship in the Atlantic Ocean. It was the sixth flight and recovery for this booster. The Starlink satellites were deployed about an hour and four minutes into the mission.

Starlink is a satellite constellation to deliver low-latency broadband internet service from space. The “Better Than Nothing Beta” testing kicked off in the United States in late October of 2020. At this point, Starlink is serving parts of the United States, United Kingdom, Western Germany, and the south island of New Zealand.

This was SpaceX’s 23rd Starlink mission overal, and the launcher’s ninth mission of the year. Out of this year’s launches, SpaceX has had two commercial missions and seven Starlink missions. Previous March missions were March 4, March 11, and March 14.

Separately, SpaceX recently struck an agreement with NASA that the agency hopes will prevent collisions between NASA spacecraft, the International Space Station (ISS) and Starlink satellites. The agreement involves no financial or services transaction. Under the agreement, SpaceX will give NASA priority and be the first to maneuver its satellites out of the way in the event of a possible collision with the ISS and/or other NASA spacecraft in LEO.