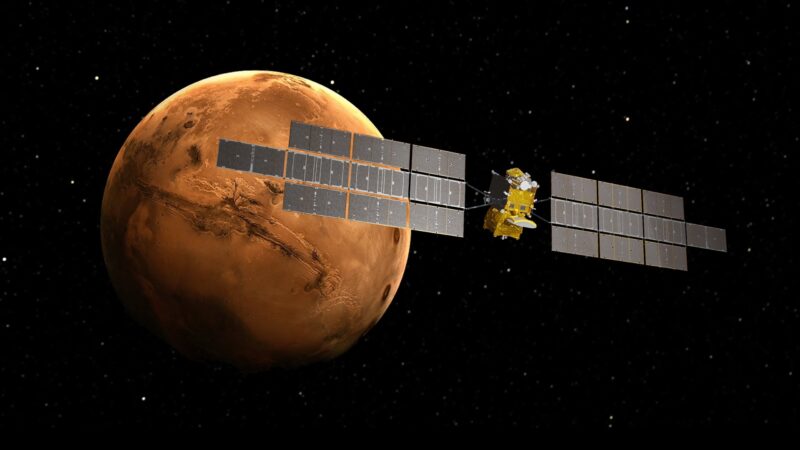 An artist’s rendering of the Mars Earth Return Orbiter by Airbus. Photo: Airbus

Airbus will design and build the Earth Return Orbiter (ERO) for the European Space Agency (ESA) and NASA’s joint ESA-NASA campaign Mars Sample Return (MSR), the next step in Mars exploration. Airbus announced Oct. 14 that this contract is valued at $575 million (491 million euro). The mission is set to be launched on an Arianespace Ariane 6 in 2026.

ERO will be the first ever spacecraft to bring samples back to Earth from Mars. ERO and the Sample Fetch Rover (SFR) are the two main European elements of MSR, both are set to be designed and built by Airbus. A manipulating arm will transfer the samples from the SFR to the Mars Ascent Vehicle (MAV), is the third European contribution to the program.

“We’re bringing the full force of our experience gained on Rosetta, Mars Express, Venus Express, Gaia, ATV, BepiColombo, and JUICE to ensure this mission succeeds. Bringing samples back to Earth from Mars will be an extraordinary feat, taking interplanetary science to a new level ” said Jean-Marc Nasr, head of Airbus Space Systems.

Separately, Airbus also announced Oct. 14 that ESA selected the company as one of the two prime contractors for the definition phase of the European Large Logistic Lander (EL3) to deliver scientific or logistic payloads to lunar surface. Airbus will develop the concept of a large multi-role logistic lander able to transport up to 1.7 tons of cargo to any location on the lunar surface. EL3 flights are set to begin in the late 2020s.