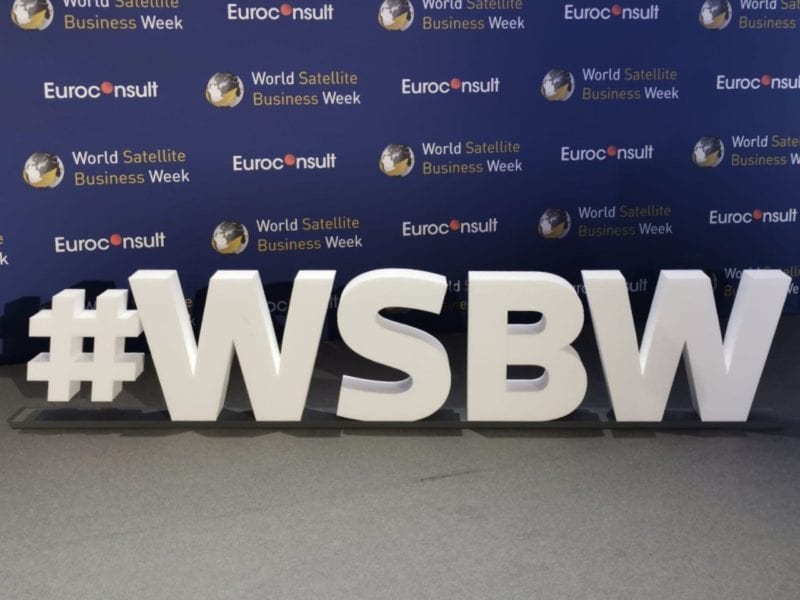 Another World Satellite Business Week (WSBW) wrapped up last week, and it represented the first chance in the fall for the satellite industry to get together and discuss the future of the industry. Here, we look at some of our key takeaways from the event.

1. Leosat and the Funding Issue

Those of us have attended many SATELLITE and WSBW shows in the past will have fond memories of SpaceX president and COO Gwynne Shotwell and ex-Arianespace CEO Jean-Yves Le Gall going hammer and tong at one another in some very heated debates at the start of the last decade. In an echo of that, the launch panel was livened up when Shotwell questioned Clay Mowry about the Telesat/Blue Origin contract and “whether any money was involved.” It drew a sharp response from Mowry and echoed back to those legendary exchanges between Le Gall and Shotwell.

Chris Johnson, president, Boeing Satellite Services International caused a stir when asked how many of these new broadband constellations will be successful. After Iridium and O3b mPOWER (SES), he thinks only one or two more will be successful. So, taking that at face value and with the likes of Telesat, OneWeb, LeoSat, SpaceX and even Amazon, even if Johnson’s best guess is correct, that means three of these will fail.

Around a decade ago, Elon Musk presented at a lunch during World Satellite Business Week (WSBW) on how SpaceX was going to re-invent the launch industry. A decade later, with SpaceX well established, it was now the next young pretender, Relativity Space’s CEO Tim Ellis,  standing before a lunch-time crowd telling the world how Relativity was going to make launching rockets cheaper, quicker, and just flat out better. Not to put pressure on Ellis, but it was hard not to think of Musk while hearing Tim Ellis speak. The industry is lucky to have such great young innovators and entrepreneurs. Ellis made a splash at SATELLITE this year, and he did the same in Paris.

We have heard the other three billion, the other four billion etc. O3b obviously bought this utopian vision to everyone’s attention a few years ago. However, while it is no doubt a laudable aim, O3b (since being acquired by SES) has become better known for connecting huge cruise ships. So, when OneWeb CEO, Adrian Steckel started to talking about mobility, and in particular how OneWeb is targeting the Aero market, it was not to have the ghosts of O3b evoked. It begged the question, who ultimately will OneWeb’s customers’ be and will it follow a much similar path to O3b than previously hoped and be more well known in the mobility segment than solving the world’s connectivity issues?

Despite the Steve Collar-taken selfie of all the major CEOs smiling in Paris, Eutelsat CEO Rodolphe Belmer’s terse response when asked the reasons why Eutelsat left the CBA provoked more questions than answers. While the satellite industry takes great store on the fact operators are the “best of fre-enemies,” Eutelsat’s exit, and particularly the timing of it, has come as a major surprise. While answers were couched in diplomacy, there was a definite feeling there was a lot more to this story. If so, why join the C-Band Alliance in the first place? Unfortunately, we found out only a little more in Paris.

It was noticeable on the big CEO panels (both in Washington and Paris) that Belmer talks more enthusiastically about video than any of the other CEOs. While Eutelsat is dipping its toes in LEO and talks broadband, it is interesting, in a world where Direct-to-Home (DTH) is more challenged than it has ever been, that Belmer is an enthusiastic flag bearer for video. Given his Canal+ background, that is perhaps not a surprise. However, given how this market is challenged, it will be interesting to see whether Eutelsat’s revenues will hold up in this area.

While the satellite manufacturers panel talked a lot about flexible and reconfigurable satellites, Lockheed Martin’s Guy Beutelschies took a different turn by emphasizing the importance of security and resiliency of satellites. With CyberSat only a couple of months away, it was one of the first times hearing a satellite manufacturer talk openly about the possibilities of the dangers of hacking satellites. Beutelschies argued that if manufacturers/operators could reconfigure a satellite, then it would be possible for an outside force to do it too. It is a very real issue, particularly as satellites become more flexible than ever before.

9. Sometimes the Best Decisions Are the Ones You Don’t Make

Roger Tong, Asiasat’s CEO, caused quite a commotion at CASBAA a few years ago in his debut speaking gig berating the likes of Intelsat, for example. He took a more diplomatic approach At WSBW, while still giving interesting insight into AsiaSat’s capital expenditure plans. The operator had planned to invest in a new high-powered broadband satellite two years ago, but for various reasons, did not execute. With the industry moving fast, and technology developing at a rapid rate, Tong believes this was a great move for the operator since buying similar type of satellite now would cost a lot less. Sometimes, the best decisions really are the ones you don’t make.

10. Springsteen Sang “Glory Days” — the GEO Market May Have Had Theirs

During every satellite conference, the industry talks about opportunities, being part of the 5G eco-system, being on the cusp of a new era, etc. However, when it comes to Geostationary Orbit (GEO) satellites, it seems even the most optimistic forecast by executives at WSBW will see only around 15 satellites ordered per year. The glory days 20 plus GEO satellite orders could now be consigned to the past. As Springsteen sang wistfully about his glory days growing up, the satellite industry could now be facing  the reality that the GEO glory days have peaked, and are never to return.