Why Adaptability is Key for a Changing Satellite Industry 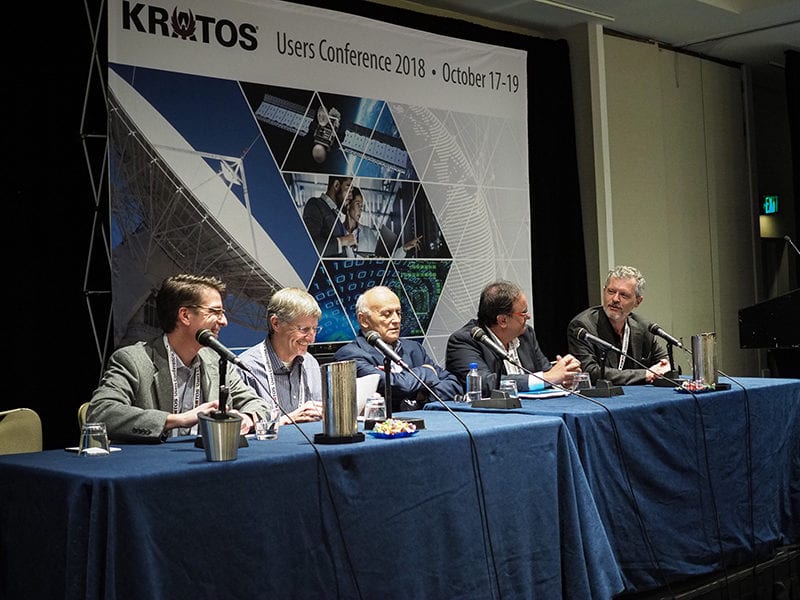 A panel at the 2018 Kratos Global Users Conference. Photo: Kratos

Prevailing trends in satellite telecommunications have brought the industry to a crossroads. The successful navigation of which will depend on what happens with ground operations, as much as in space. Bandwidth prices have dropped sharply amid a capacity glut magnified by decreasing demand from television broadcasters — a longtime anchor customer for satellite operators. These developments have shaken some of the luster from an industry that, just a few short years ago, was awash in profits.

According to experts gathered at the 2018 Kratos Global Users Conference, the industry must adapt (in part by cutting infrastructure costs in space and on the ground) to succeed in the years ahead. To thrive, it must find a way to integrate satellites more closely with — and in the process, grab a larger share of — the broader telecommunications business.

“This is a moment that is called a singularity,” Thierry Guillemin, former executive vice president and chief technical officer at Intelsat, said in a keynote address at the conference. “That means it’s a moment where there is no way to predict what will happen next.”

Bandwidth price erosion is expected as High Throughput Satellites (HTS) in Geostationary Orbit (GEO) are joined by large constellations in lower orbits, said Guillemin, now president of the New Space Directions consultancy. He said that each orbit offers unique advantages, noting that GEO satellites, (which hold fixed positions 36,000 kilometers above the equator) can cover large areas economically and quickly, but suffer from latency that can disrupt certain applications. Constellations in lower orbits have far less latency, but require many satellites to achieve global coverage.

Another trend on the space side is the commoditization of satellite hardware, a notable example being the push by SES for standardized, software-defined satellites that can be rapidly reconfigured on orbit depending on market demand. Standardization will enable manufacturers to crank out satellites assembly-line style, lowering costs through economies of scale. Guillemin raised the possibility of operators being able to buy satellites off the shelf, whereas now they are made to order in a process that typically takes two years or longer.

“It’s beginning to make the satellite less important,” Phil Carrai, president of Kratos Technology and Training Division, said of the forces now shaping the industry. “If you have that much capacity and the satellites are reconfigurable then the real activity must be in the network; if you’re going to differentiate versus the competition it’s got to be on the ground side.”

The changes that must take place on the ground range from consolidation and automation of satellite operations and network management functions, to the introduction of individual user terminals that connect seamlessly with different satellites regardless of orbit or ownership, officials said at the conference. Some of these changes are already underway, a problem that Kratos has seen with a number of its customers.

Stuart Daughtridge, vice president of advanced technology at Kratos, said the company is beginning to move away from what he characterized as “stovepipe” architectures where different command and control management functions are handled by discrete systems, each with its supporting personnel and infrastructure. Increasingly, he said, Kratos is offering systems that consolidate multiple functions, such as satellite control and signal monitoring, on a single platform.

In an ideal world, this interoperability would even transcend corporate proprietary boundaries, enabling systems provided by one company to work seamlessly with those supplied by competitors. However, at least one speaker said that might be a bridge too far. “It may be an uphill battle for the individual satellite operators and different providers to come together and create standards if these standards remove their ability to differentiate,” said Dan Sullivan, chief technology officer at Kratos. More realistic is a degree of commonality that would allow customers of one operator to access unique services offered by a different operator, he said during a panel discussion on the industry’s future.

There was seemingly unanimous agreement on the satellite industry’s need to become more closely integrated with the broader global telecommunications grid, of which it represents just a small fraction. “We as an industry are less than 1 percent of a $6 trillion terrestrial networking services capability,” Eric Watko, executive vice president of products, marketing and strategy at SES Networks, said. “So how do we get into that market segment?”

A big part of the answer is economic — getting prices to a point where the large telecommunications companies see value in adding a satellite component to their networks. In that respect, the declining cost of bandwidth could be more blessing than curse, provided the industry is successful in significantly reducing its operating costs.

Guillemin said promising growth areas for a satellite industry with reduced overhead include Machine-to-Machine (M2M) communications, connected vehicles, and other applications which feature closer integration between the satellite industry and the internet. If bandwidth costs get low enough, new, unanticipated applications are likely to emerge.

According to Daughtridge, the good news is that terrestrial bandwidth prices dropped 99 percent during the 15-year period from 2001 to 2016, but the industry nonetheless grew massively by introducing new services to their offerings. “I think that’s the kind of period we’re entering as an industry where we’re going to put up a lot more bandwidth but we’re going to see growth,” he said. 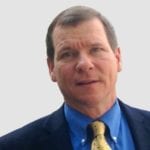 Warren Ferster is a Washington-based consultant and writer specializing in the space and satellite industry. Previously he was with SpaceNews, where he spent 21 years, the last eight as editor in chief.