Lockheed Martin has invested $300 million to develop a new family of satellite buses that incorporate a range of manufacturing and design enhancements, as well as hundreds of common components to speed production times and reduce costs. According to Kay Sears, Lockheed Martin vice president of strategy and business development, the new buses are a response to growing customer demand for more powerful, versatile and compact assets in orbit.

“Customers want a choice,” Sears said at a press briefing during the Air Force Association’s (AFA) Air, Space and Cyber Conference on Sept. 19. “They want a variety of buses; they want to go to a variety of orbits; they want to handle missions in different ways. Low Earth Orbit (LEO), Geosynchronous Earth Orbit (GEO) and other orbits in between are becoming more important.”

Satellite technology is evolving at a breakneck pace, opening up new missions, applications and use cases in both the government and commercial spheres. “All of that is driving technology to get smaller, faster and more cost effective,” said Sears. This is particularly true for military end users such as the U.S. Air Force, which Sears said is seeking faster production lines and more capable payloads as it works to improve military operations in the space domain. “I think the future Air Force architecture will need to have a mix of these buses and orbits,” Sears said. 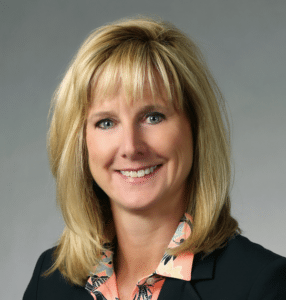 To pursue a broader range of solutions for the government, Lockheed Martin recently invested in nanosatellite manufacturer Terran Orbital. According to Sears, the company is taking advantage of Terran Orbital’s relationships within the government vertical to expand its customer base. “They have a number of relationships with key customers that parallel some of the mission areas that we’re interested in,” Sears said. She described the pairing as complementary due to Lockheed Martin’s heritage as a systems provider and Terran Orbital’s experience in manufacturing miniaturized assets.

According to Sears, the nanosat LM 50 series is ideal for demonstrator missions, such as testing the operation of multiple nanosatellites in a swarm, validating space-qualified components or communicating across multiple orbits. Slightly larger, the LM 400 bus builds upon Lockheed Martin’s previous 150 customized smallsat designs, “[pulling] together the best of those unique satellites into a common set of components,” Sears said. “This enhanced version of our smallsat costs about 20 to 30 percent less and is delivered within 24 months or less.”

Like the LM 400, the mid-sized LM 1000 bus can operate both in LEO and GEO, but is more suited for remote sensing missions that require high-power payloads. “Some of the payloads that used to fly on larger buses can fly on LM 1000. Think about high power missions that don’t necessarily need the weight,” Sears said.

For the new LM 2100 series, a continuation of the more than 100 A2100 satellites Lockheed Martin has previously built, the emphasis is on “reliability and performance,” Sears said. The company has implemented 26 new enhancements from the previous design, including improved flight software, propellant tanks, optical solar reflectors and other components.

According to Sears, one of Lockheed Martin’s primary objectives with the new family of buses was to establish a “baseline of commonality” — that is, to develop common components that can be used in each bus line. “That reduces cycle times, production costs and improves reliability because we’re able to leverage our supply chain across all of our bus lines,” she said. The shared components include propulsion mechanisms, power regulation, thermal control, reaction wheels, gimbals and more. “There will be over 280 common components in this new family of satellites, which is expected to yield millions of dollars of savings across the fleet,” Sears added.

Lockheed Martin has also expressed an emphasis on software-defined technology and digital payloads to ensure its satellites can adapt to evolving customer demand while still on-orbit. “Once you put a platform in space you want to be able to reconfigure it for the trends that come,” Sears said. “The ability to reconfigure those capabilities in space… [hedges] against these rapid changes.”