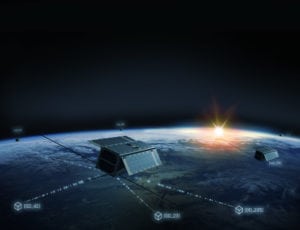 A nanosatellite in ELSE’s AstroCast constellation, rendering. Photo: ELSE

[Via Satellite 12-08-2016] Swiss start-up ELSE has retained the Picone Advisory Group to help the company acquire funding for its 64-nanosatellite constellation AstroCast.

AstroCast is a network of nanosatellites that aims to provide global Machine-to-Machine (M2M) communication for businesses worldwide. The constellation will allow companies to affordably connect assets to information systems through Internet of Things (IoT) services, according to a statement released by ELSE.

The start-up will require an estimated $50 million to build and launch the AstroCast constellation, which ELSE plans to build in-house. The company aims to place two demonstrator nanosats into orbit in the fourth quarter of 2017. The constellation is set to enter commercial service in late 2018 when ELSE will place the first eight satellites, each having a design lifetime of up to five years.