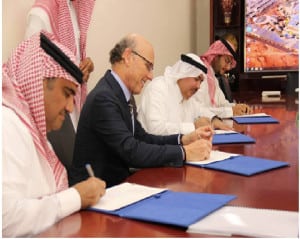 [Via Satellite 05-10-2016] Taqnia Space, Skyware Technologies and Crescent Technologies have signed an agreement in Saudi Arabia with King Abdulaziz City for Science and Technology (KACST) to create a joint venture that will manufacture satellite equipment for the global industry. KACST is considered to be the main technology partner for the new Saudi venture, which has an initial focus on manufacturing the country’s first Ka-band High Throughput Satellite (HTS) terminals.

This initiative is the product of a long-standing relationship between Crescent Technologies founders Bandar Al-Saud and Omar Talib and Granahan McCourt Capital principal David McCourt, who have partnered together on multiple telecom, media and technology ventures.

“With the expected cooperation between the new joint venture and KACST as its technology partner, the joint venture and satellite Radio Frequency (RF) manufacturing facility will help to propel the kingdom of Saudi Arabia to become a leader in advanced integrated terminal solutions,” said H.H. Dr. Turki bin Saud, president of KACST and chairman of the board of directors for Taqnia.