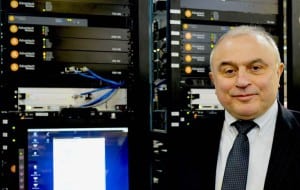 [Via Satellite 01-06-2016] In our third special year-in-review features, where we talk to CEOs of major satellite companies about 2015, we talk to David Gelerman, CEO at Advantech Wireless. One of the keys going forward for the industry is whether technology players will be able to keep pace with some of the big ideas that seem to be coming out. One of the companies that will undoubtedly play a key role here will be Advantech Wireless, a major player in the amplifier sector, and a recent winner of Via Satellite’s Technology Company of the Year Excellence Award.

Diving right into a big buzz-generating topic in 205, Gelerman told Via Satellite that he is confident some of the new Medium-Earth Orbit (MEO) and Low-Earth Orbit (LEO) systems will likely be more successful this time around than they were in the late 1990s.

Gelerman believes High Throughput Satellites (HTS) has heralded the end of high cost Ku-band and C-band spectrum pricing. However, he believes intense competition could come at a cost.

“We are experiencing the rapid decline of the traditional [Geostationary Orbit] GEO bandwidth cost and the incredible competition from both satellite operators and gateways/VSAT platform equipment manufacturers to sell equipment at any cost. This is a slippery slope that will inevitably end up with some crashes and industry consolidation,” he said.

FSS operators have to make three key decisions in order to remain competitive, according to Gelerman. “[First,] they must consider whether to launch or acquire low cost multiple spot beam HTS satellites in Ku-band and Ka-band. Secondly, they must consider whether to consolidate or acquire the competition, or they themselves could face the prospect of being acquired. Finally, they need to think about whether to vertically integrate their spacecraft with ground technology platforms of their choice to improve overall performance,” he added.

In terms of what he felt the highlight for the satellite industry in 2015, Gelerman points to the impact of launch service provider SpaceX, which he is said is completely revolutionizing the satellite launch industry, making it overall less costly, more reliable, and affordable for low-cost constellations to be put in orbit.

However, while Gelerman predicts tough times ahead for FSS operators, he is optimistic that the industry is in a good place as we head into 2016. “I think that, for the satellite industry as a whole, 2016 is shaping up remarkably well. The end users and the [Internet Service Providers] ISPs will benefit from the low satellite equipment cost and will be able to achieve better penetration and number of subscribers with lower ARPUs. We will see more HTS announcements and launches, more consolidation between satellite operators and VSAT equipment providers,” he said.